The secret to kichelicious kichel 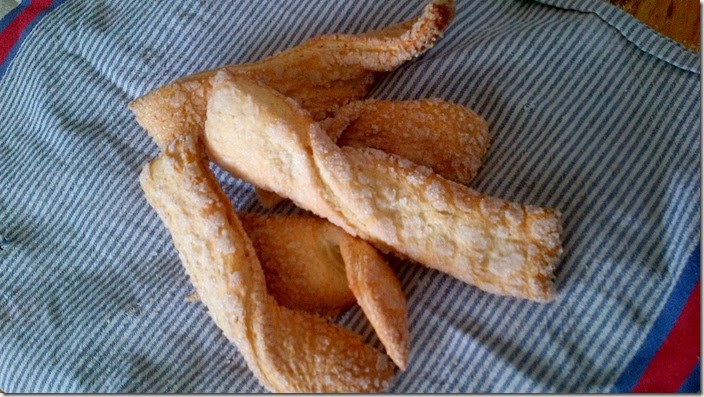 What are kichel, you ask?  Whether you know them as “bow-ties” or “nothings” or “eyer-kichel” (my Bubby’s version) or “keekle,” they are cookies, but they are so much more than cookies.  Actually, they are both more and less than cookies.  They are puffed-up egg and air trapped in a gluteny web of flour.  They are not themselves sweet, but coated in sugar so eaters think they are.  Good kichel are addictive:  like popcorn, you can’t eat just one.

Though heavy and Jewish and rich and filling, they are also just that little bit zen.

And now I have learned the secret to making good ones!

Growing up, I was fascinated by everything about my mother’s new mixer.  Yes, even ten years later, it was still her new mixer.  It was special:  it was a Kenwood Chef.  She had to special-order it from England, and after she did, spent the next ten years correcting people who thought it was a Kenmore.  Kenmore was a cheap Sears brand you could get at Fairview Mall; Kenwood was NOT.

I thought this mixer was the most beautiful thing in the world… and now, here in Israel, I find myself the owner of pretty much the exact same one.

How did this happen?

Well, I found it in the trash.

Not the TRASH trash, exactly.  The pile of used clothing and junk that people donated to the Merkaz Klitah (immigrant absorption centre) where we were living.  I spotted it there in the pile one day and grabbed it to haul up to our apartment.  There was a grocery-store bag that contained only the meat-grinding attachments; I took those, too, though I had no interest in ever grinding meat with the thing.

Up in the apartment, I blew off the dust and plugged it in.  It worked!  Well, it made a loud, loud grinding noise, probably the result of not being oiled in 30 years (oops; I still haven’t).  But the motor worked.  The little blender thingy on top spun, as did the mixer part underneath. 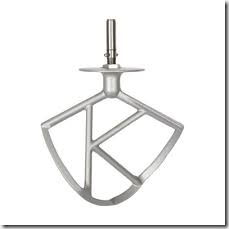 So I visited ebay and ordered a brand-new bowl and K-beater.  I loved the K-beater as a kid.  As my mother explained it to me, not only was it the initial of the product (like Superman’s shirt logo!), but it was also the perfect shape to mix ANYTHING.

Ha.  And my mother thinks I don’t listen to her… in certain areas, if I was interested enough, her words will stay with me forever.

And now, as an adult, living in Israel, the K-beater seems to be the secret to perfect kichel.  Maybe not just the K-beater, but I should back up to explain that I have never had a good mixer before.  Only an assortment of hand mixers, one of which was destroyed trying to make kichel a few years ago.

(here’s another post I wrote about making kichel, showing the process step by step)

Although I mentioned a few weeks ago about the frustrations of baking in Israel, and how nothing comes out quite right here, kichel has been the exception.

Like the recipe I use says, you have to have the ability to mix it HARD for five minutes.  The more gluten in the flour, the better.  You are practically making bread out of the stuff.  And that’s where my “old-new” mixer comes in.

Dump everything in the bowl:

Cover it with a towel (I couldn’t find a bowl cover on ebay for this model… but ha ha, as long as I make sure the towel doesn’t get caught inside, I don’t need it!).  I tried a couple of times without the towel, but the initial whomp of the motor sends a LOT of flour flying around.

Once the dry flour has been mixed in, I can uncover the bowl:

When I slipped these into the oven, I inadvertently discovered Secret #2 to Kichel-icious kichel:  convection oven.  Somehow, we happened to end up with a convection feature in our teeny-tiny bare-bones Israeli oven (the model I ordered was out of stock, so they substituted).

And it turns out convection is perfect for kichel.  Baking them in a regular oven, the essence is to “toast” them lightly to dry them out without burning.  Because of the increased air flow of the convection feature (you’re supposed to also turn down the temperature a bit so things don’t burn), the kichel dried out beautifully and puffed up even more than usual.

So there you go – two secrets for the price of one.