Getting “back” to normal… On baking in Israel.

Decorating challahs with kids makes me feel "normal," like we're at home, no matter where we happen to be living...

We are starting to get into a bit of a routine, but things are still difficult.  I don’t know; the ingredients are all the same, for the most part, but a lot of what I bake just doesn’t turn out “normal.”  I had a few weeks of making lemon bars that were just awful, like practically inedible.

Part of the problem is the pan size – you can’t get 8 x 8 or pie pans here, so you have to adapt recipes or they will turn out wrong.  The lemon bars, for instance – I was making them in a bigger pan and it just didn’t work.  They were too thin and overbaked.  Last week, I hauled out my one 8x8 pan, which is dairy, and made the whole lemon bars dairy just so I could use the pan.  (Well, they were pareve, but used dairy things for cutting and squeezing and grating and mixing the lemons.)

Other things just taste weird, or disappointing.  I made blueberry buns a few weeks ago, and they looked beautiful, but the only blueberry pie filling you can buy here is just awful.  Like chemically-tasting instead of good.  So I couldn’t eat these either.  (No, you cannot buy fresh or frozen blueberries here to save your life.)

If I want to make blueberry buns again, I will have to figure out another filling.  We have lots of nice fresh strawberries right now… but somehow, “strawberry buns” doesn’t have the same ring.

There are other little problems, like the fake baking chocolate known as Cimcao or Tsimcao:

To quote a pithy description I found on a baking group:  “tzimkao is a revolting mix of sugar and a bit of cocoa. maybe some fake vanilla as well. not only is it nothing like unsweetened baking chocolate, but it's not even bittersweet chocolate. it's soft and *very* sweet, with a slight cocoa aftertaste. yeeeeech.”

Of course, most of the vanilla here is fake, which affects the taste of things, and I’m almost out of my imported Canadian vanilla, but you can make your own easily enough with vodka and a vanilla bean.

The maple is also fake, which made it fun when we went out for a nice Chinese restaurant meal in Haifa last week.  For dessert, I ordered the fried banana, which was yummy, but they served it with a fake-maple syrup dip.

Well, obviously, as a Canadian, that’s not something I was going to stand for!  I had seen several honey-based things on the menu, so I requested that they replace it with plain honey.  Here’s what they brought:

I think even from a picture, you can tell that it’s not honey.  It was very watery, and also (when I hesitantly tasted it to see what they’d brought!), it was quite salty.  “Zeh lo dvash ragil,” I said.  (“It’s not regular honey.”)  “Well, that’s what we have,” argued the waiter.  “But it’s salty,” I said.  “Regular honey isn’t salty.”  He took it back to the kitchen and ended up bringing me two little disposable packets of honey from the hotel’s dining room (the restaurant was in a hotel).

Once they got it right, it was yummy!  Which is how I feel about everything I bake here.  It’s frustrating, starting from scratch, when recipes I’ve used for years simply don’t turn out, for one reason or another, or for no reason at all.

The challah, at least, seems to work every time.  And that’s why it’s so comforting.  Something I can make, using the regular recipe, and it tastes… like home.

Here’s how “his” challahs turned out, by the way.  I let him go a little crazy with the poppy seeds… fortunately, when that happens, most of them get knocked off in the baking / transferring process. 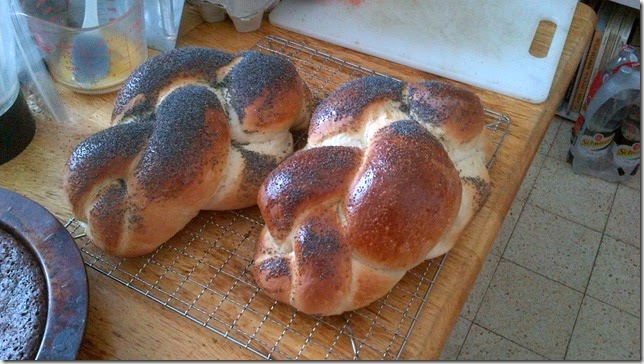 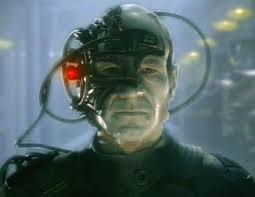 I wish you all a very good Shabbos and, if you are new to baking in Israel or any other new place… a klitah neimah, a pleasant absorption.  Which always makes me think about the Borg, but okay.

A little absorption is probably a good thing, except when it comes to liking that blueberry filling, baking with Tzimcao, or accepting fake maple syrup when the real thing is so very, very awesome.