So when I open my big mouth, I sometimes end up with a Shabbos like last week where I owed 5 challahs to various people around the neighbourhood, plus 3 for us = 8 challahs. 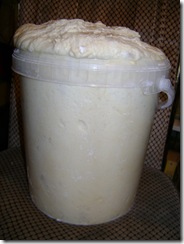 Plop!  Out on the table!  I had to elevate the bucket so it would fall out.  Here is my hand in its midst, for size comparison: 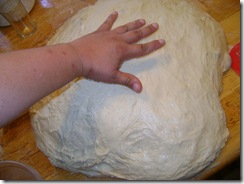 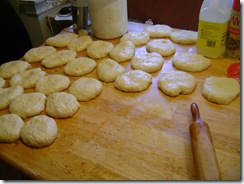 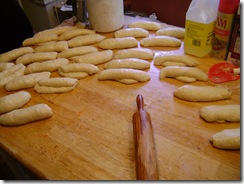 (the progression as the challah takes shape, by the way, is as follows:  blobs, balls, pancakes, slugs, snakes, challahs)

You can’t really tell from the pictures, but the dough was ridiculously soft, pretty much at the limit of what I can work with, though a few weeks ago, I did a batch that was worse: it was ALL BUT unworkable.

Even fully-cooked, the challahs were frighteningly bendy in the middle.  They also grew tremendously and bonded with each other in the oven.  Here are 3 of them in a cardboard box, alongside some cookies, banana cake, chicken, soup and vegetables, all on their way to a neighbourhood family with a new baby: 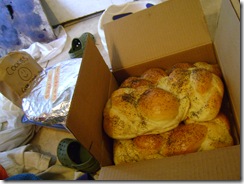 But that wasn’t the only mitzvah… because I used such a tremendous amount of flour, I was also able to take challah with a bracha, which is more of a rarity around here than you might think.

And lest you think I’m an actual balabusta, it was 40° in the kitchen, sweat was streaming off me, my family and everybody in it was utterly miserable.  And the vegetables I sent?  Frozen – steamed to perfection, of course, and that was nothing less than what I was serving the rest of us for Shabbos dinner.  But still, I felt like I ought to have included a kugel…

Here, because you are the only people who will care about this at all (even my family – who eat the challah happily each week – don’t want to hear too much about it!), are a couple of pictures of the week I made an almost totally unworkable challah dough:

The dough itself – blahb.  You can see that it’s just one step up from cake batter, smeared on the bowl scraper like this. 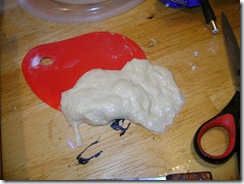 Somehow, by a neis, rolled up into the  most sluggish slugs. 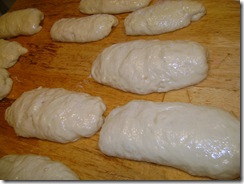 Again, by sheer force of will, snakes: 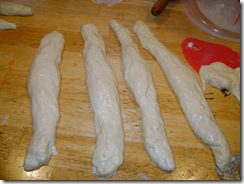 And somehow, beautiful braids.  I baked these in pans because I wasn’t taking any chances with spreading.  (I have already mentioned how much I love my Lodge-brand cast-iron loaf pans from Sara???    Even a wet bread like this releases like a charm…) 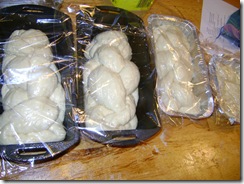 And, baked at last! 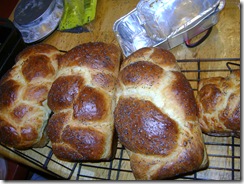 See?  This is why my family doesn’t care that this was the wettest dough I have ever made a shaped bread with.  Once it pops out of the pans, you can’t even tell that it’s anything special at all.  Although this past week’s challahs remained remarkably soft the entire Shabbos, nobody even cares about that – they just pretty much take it for granted.

When you talk about bread, does anybody listen?  (I will!)