Note to Self: YEAST!

3 pm on a winter Friday afternoon is NOT the best time to realize the challah that has been lovingly rising since late the previous night actually contains NO YEAST.

I was lying down with GZ when I realized… I started visualizing me getting out all the ingredients the night before: salt, sugar, flour, water, oil, eggs… nope, definitely no yeast.  Eeeeeek!!!

I basically threw GZ down on the bed, raced to the computer to Google “forgot yeast bread help” or something like that.  Yay – a solution!

I took the FULL AMOUNT of yeast called for in the recipe, added a bit of sugar and enough water to make a thin paste.  (note to self: use a bowl next time, not a teeny tiny container, because it WILL bubble up)

5 minutes later, it was bubbly – ready to go!  I smeared the paste everywhere and kneaded it in as well as I could (the site I found suggested not overkneading the dough, but how the heck do you do that without the finished bread being full of yeasty-pasty blobs???). 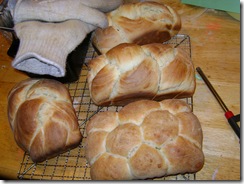 I was prepared for disaster, but actually, they did rise quite a bit in the oven.  Not much on the table, which meant they were not the most beautiful loves… but at least they were loaves.  And in fact, at the Shabbos table, in the actual eating, they weren’t THAT much worse than my regular challah.

So… lessons learned, notes to self.  I have made challah without sugar, salt, oil, and now, yeast.  Just when you’re starting to feel cocky… well… at least I managed to save the day!