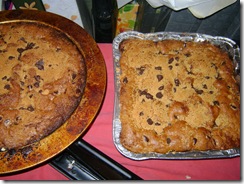 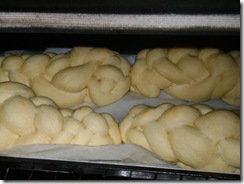 In case you were thinking I was not a total tzadekes, a friend who’s expecting baby #2 had a cold this week and I offered to send in Shabbos food.

A cold is not a major ailment, as these things go… I wouldn’t want her to be terribly sick!  But I do remember feeling less than pampered, particularly during pregnancy #2, particularly after how much fuss everybody makes over you during your first pregnancy.

As far as I’m concerned, every mama deserves to be pampered during every pregnancy, whether it’s her first or her tenth.  However, somebody has to look after the other nine kids, so that doesn’t usually happen.

Still; this is the kind of thing I wished people would have done for me, rather than waiting ‘till the baby comes and I’m in real pain before sending in the food.  If you’re in too much discomfort, you don’t really appreciate the food, right?

This was the regular Breadsmith challah that I’ve been baking the last few weeks (no vanilla!!!).  I may switch to something else next week.  It’s a lovely, glossy dough that is easy to work with, but … hmm… the challah isn’t all that exciting.