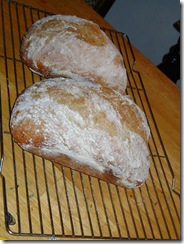 New bread book from the library! Artisan Bread in Five Minutes a Day: The Discovery That Revolutionizes Home Baking, by Jeff Hertzberg and Zoe Francois.

I have been baking from this book – especially the challah recipe, which I’ve been tweaking for better workability – for months now, so it already feels like an old friend.

I came this close to buying it in Chapters a few weeks ago, and decided not to because it doesn’t really include very many recipes. However, sitting down with it, I’m sort of starting to rethink that decision… I think this one may be a keeper.

Now that I have it in my hands (not literally; I had to put it down to type) I’m finding I do love the happy, balanced tone of the book itself – above and beyond its core formulae (of which there are more than I’d originally estimated, however).

I like the fact that most of the recipes are non-dairy, though some do include milk and butter and whatnot.

Anyway, I really want to make as many of the breads as appeal to me (not all do), starting with the semolina bread, which I’ve been wanting to try anyway… however, since I decided that, I have been completely unable to find semolina flour in our regular grocery stores.

I used to buy it all the time when I made pasta, but now it seems to have vanished from the shelves. Will have to try again over the weekend. I don’t love sesame seeds, but Hertzberg and Francois say the combo of semolina and sesame is wonderful, and I think I’ll trust them and try it out the way they say.

Meanwhile, I decided to make the very blah-vanilla-looking Oat Flour Bread (p. 104). Well, I wanted to make the Oatmeal Bread (p. 94), but it looked too involved, and I was tired, so I decided to just chuck a cup of rolled oats into the Boring Oat Bread and call it a day.

Except the Oat Bread calls for oat flour, and I forgot until halfway through mixing it that what I’d bought was barley flour (the store had no oat flour, so I figured I’d find another recipe). I should call this blog “The Distracted Chef” because yes, when shopping with children I forget what I’ve bought, and when baking with children, I forget what flours I have on hand.

So I made (b)oat bread! The B is for Barley, which I substituted for the one cup of oat flour called for. I used bread flour because we were out of all-purpose, cut down the flour by one cup and dumped in the cup of rolled oats to liven it up.

What else? Oh, yeah, while I was massacreing the recipe, I added 1/4 cup of maple syrup because the Oatmeal Bread calls for 1/2 a cup and it sounded yummy, but we only had 1/4 cup left in the house; I reduced the water accordingly. 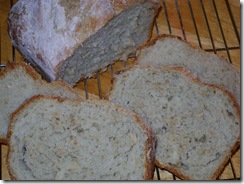 The barley and maple syrup gave the bread such a lovely, soft sweet taste and texture.

Soft means this bread is very hard to slice when hot…but reasonable once cooled. I made grilled cheese with this bread today for the little kids’ lunches. 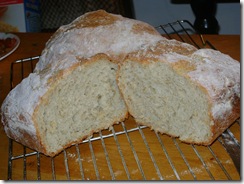 The rolled oats disappeared completely, by the way; I could feel them with my fingers when I was forming the loaves, but there was no trace of them on my tongue when eating the bread.

So there you go. Sometimes you work hard and the bread flops… and sometimes you just throw a few things in a bowl, stir it around, and end up with Very Good Bread.

The super-nice thing is that the recipe made enough for three loaves… I baked up two last night before supper (served it with lasagna), and saved one to bake tonight so we will have fresh bread for the kids tomorrow morning. Yay, me!