I've been on a bean kick this winter.  So when I wanted an out-of-the-ordinary side dish that would double as something appealing and warm that I could offer the kids when they came home on a blustery, rainy day, I decided this Caribbean-style rice would be incredible.

I'm calling it “Caribbean-style” (sorta Caribbean) because I've never had ACTUAL Caribbean rice.  And I didn't follow the recipes I found online (mainly this one) to the letter.

2017 UPDATE!  Watch me make a quick-n-easy variation of this recipe that you can throw together in under half an hour:

Most of the recipes I found are spicier than my family likes, although one I found suggests cooking the pepper without opening it (do not peel, seed, chop etc, just toss it in whole), which apparently adds  warmth without spicy violence.  Sounds like a great hack if I ever feel like pushing the envelope.

The flavour I was going for, however, was more warm, comforting and robust than just… hot.  And I think I hit it perfectly.  The kitchen smelled beautiful while this was cooking.

I used kidney beans, which I’d soaked (even though you don’t have to soak your beans) and this rice turned out a beautiful comfort-food blend of creamy (but pareve), savoury and delicious.  The creaminess reminded me a lot of a risotto, but it comes from the coconut milk, meaning this is anything but a reduced-fat kinda dish.  (If you want lower-fat, use Arborio rice, chicken soup and a pressure cooker to make real risotto.)

You could probably use any beans you like, because they’re precooked, so cooking time doesn’t matter.

You can vary the quantities of ginger and garlic according to your tastes.  I really like them, so I used quite a lot, as you can see where I’ve dumped them in here.  (I started making this in the cast-iron skillet, because it’s better for frying, but quickly realized I was going to have an overflow situation on my hands once I added the liquids.) 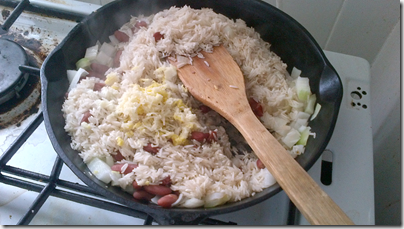 So I quickly shifted the whole thing to my big dairy soup pot.  Perfect!  I would also have used more beans.  You can barely see them in the pictures… so I’ll throw more in next time I make this.   And there WILL be a next time, I assure you. 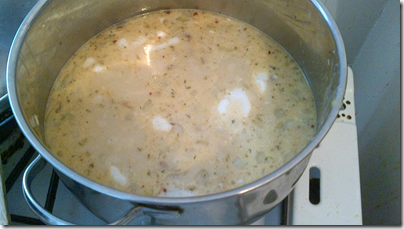 By the way, I didn’t tell my family it was Caribbean rice at all.  I just said, “There’s rice.  It’s good.”  Why scare them with unfamiliar terminology before they’ve had a chance to fall in love with it.  Right?

Why not taste it and see for yourself? 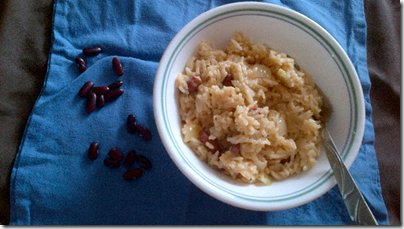