Go soak your head… and NOT your beans! 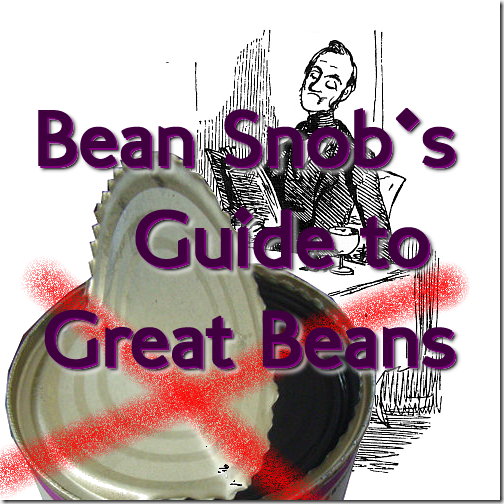 Here it is:  The bean snob’s guide to delicious quick-cook, no-soak beans.

Do you love beans?  Or do you just put up with them?

For years, in Canada, we were hooked on canned beans.  We put up with them, even enjoyed them, if they were seasoned heavily enough.

(nothing delicious can come out of here…)

Canned beans may be easy, but they are also mushy and worse than flavourless – they’re tin-flavoured.  Here, canned beans practically don’t exist, so we don’t have any choice.  And the great news is that from-scratch beans are tastier, too.  By which I mean they taste like something.  As opposed to a tin can.

But I’ve also discovered, mainly through this post from the kitchn, about how to cook beans in the oven, that you don’t have to soak the most common kinds of beans before you cook them.

These days, I just toss the unprepared beans in my dutch oven and throw them in the oven.  I add some basic seasonings to the pot – salt, pepper, and here, you can see some bay leaves floating around in the pot.

(It smells great while they’re cooking, by the way.  Unlike tins of beans which smell like… nothing.  Even after you open them up.)

You’re probably going to ask how long to bake them for, and at what temperature.  The Kitchn says 75 minutes at 325°F, after a quick initial stovetop boiling.  (Boil 15 minutes for kidney and cannellini beans because they contain a toxin that you need to boil off.)

To be honest, I’ve been skipping the initial boil.  I usually fail to plan ahead and end up doing the beans on a Friday when we have other things on the go in the oven.  So I just lower the bottom rack and leave the pot in there, checking it after 90 minutes and giving it an extra half-hour to cook if it’s not ready yet after that.  It’s not wasting energy if you’re using the oven anyway, right?  If you’re less patient than me, or more organized, then try the quick boil first to get your beans cooking right away.

What can you do with the beans once they’re cooked?

And here’s a great no-soak recipe for your basic – delicious, Cuban-inspired – pot o’ black beans.  It’s perfect for lazy cooks, and anyone else who loves great food.

Do you have any ninja tricks to make bean cooking faster & simpler?  What about killer recipes?  Let me know in the comments!