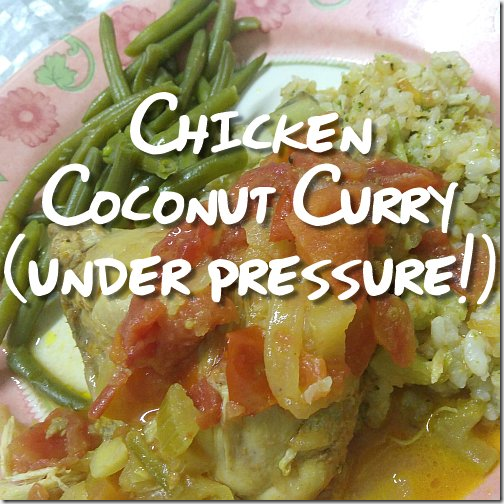 What kind of flavours are you craving this winter????
Winter is still here in Israel, and if you're like me, you may be desperate for warm, flavourful recipes that are a little out of the ordinary.  That's the case with tonight's super-easy pressure cooker chicken dinner.
This recipe is unusual for this site.  Why?
Well, first of all, I don't even remember if I've ever posted any meat recipes here.  Certainly, there aren't many.  But winter time is meat time as far as I'm concerned.
Second of all, because it calls for a pressure cooker, which is a big and cluttery piece of kitchen equipment, and in general, I prefer to go low-tech and skip the gadgetry.
But I like my pressure cooker enough to have brought it with us when we made aliyah and it's growing on me every single year.
A couple of weeks ago, I decided to crowdsource my supper-making decision.  I had a bunch of chicken, I  had enough time, so I asked my foodies group on Facebook whether I should make it in the crock pot (slow cooker) or pressure cooker.
The answers were inconclusive, which was weird because I was sure people would have an opinion one way or another.  But one person very helpfully posted a link to an article by the awesome J. Kenji Lopez-Alt, who's quickly becoming one of my foodie heroes, about why pressure cookers totally knock slow cookers out of the water.
(He's the same Food Lab guy who changed my life by telling me I don't have to precook pasta for lasagnas and casseroles! check it out here)
Yes, there is still a place in my heart for my trusty crock pot.  Nothing else can handle cholent quite as well, and if you’re going to be out for hours and want hot supper when you come home, the crock pot is fabulous.  But if you’re home anyway, and looking for a quick and delicious supper, basically the article explains that you can get richer flavour
much, much faster with a pressure cooker. Lots of people have gotten into pressure cooking lately because of the Instant Pot, which is an electric pressure cooker.  As far as I can tell, the biggest difference is that the Instant Pot has a bunch of super-flexible high-tech modes, including a high-pressure, low-pressure, slow-cooking, and probably canning modes (feel free to correct me if I’m wrong…!).  The Instant Pot also comes with nifty accessories like liners for baking and steaming so you can do more with it.  It’s a kind of pressure cooker, but it’s kind of like third-generation (first generation pressure cookers were the old-fashioned jiggler ones that tended to explode; mine’s second-gen, low-tech, and Instant Pot is the shmancy electric kind…).
The pressure cooker, on the other hand, does nothing except pressure cook.  Mine’s a very classic Lagostina with a handle that seals the lid on and locks in place when it’s cooking at pressure.  It’s not fancy, but I got it for free years ago and it does the job really, really well.
My humble Lagostina pressure cooker vs the shmancy new Instant Pot… 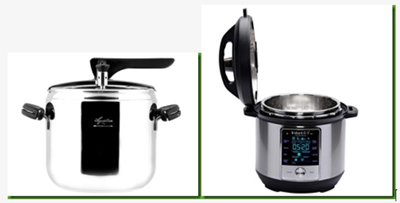 Honestly, the pressure cooker is a magical way to cook, because it brings all the flavours together and creates the kind of richness and complexity that you’d ordinarily expect from slow-cooking, with all the benefits of fast cooking (like having supper on the table sooner!).
My go-to pressure cooker recipe is sausages and rice, a delicious and flavourful one-pot meal that I raved about a couple of times back when I got the pressure cooker, and which has continued to be a favourite of mine (and for some reason, universally dreaded by my children).  I prefer to make it with merguez, a nicely spicy sausage, but have also been known to make it with chorizo, which is also yummy.  There isn’t a lot of choice when it comes to kosher sausage, but I assume any richly-seasoned sausage would work perfectly.  I make it with fresh onions, frozen vegetables, and arborio rice, with chicken broth from powder and a little white wine.  Maybe I’ll share the recipe here at some point.
(In Israel you can buy real chicken broth powder, and no, it’s not healthy, but yes, it is convenient.  The biggest problem is that it looks very much like the pareve stuff, with only one word different on the package and a slight colour difference, so you have to be super-careful when buying and using it in a kosher kitchen:
pressure_soupdiff
(see?  only one word difference!)
But tonight, I wanted something fresh from the presh, and couldn’t make sausage risotto (full disclosure – we had sausages last night!!!).
I had a chilly, dark, rainy winter evening descending, some chicken pieces sitting here in the fridge burning a hole in my pocket, and a pressure cooker burning a hole in my cupboard.  (Okay, that whole “burning a hole” metaphor probably doesn’t work in all cases, but you know what I mean…)
So here’s what I made:
Start with some veggies… 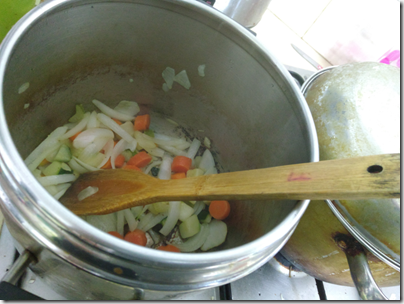 Add some browned chicken and apple, and spices… 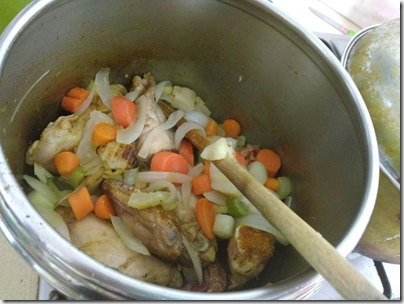 Pour in a can of diced tomatoes… 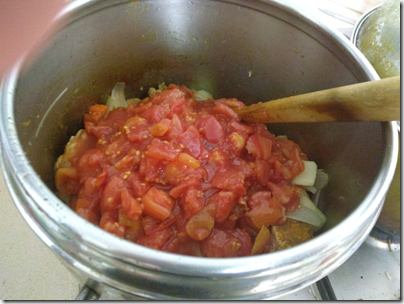 And finally, coconut milk makes everything so delish…! 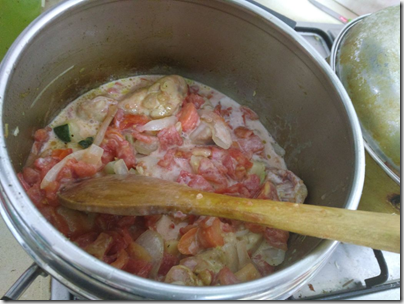 Now just seal it up for 12 minutes to cook under pressure… and open it up to find everything delicious, tender, and full of moist, rich flavour (but not mushy, that’s important!). 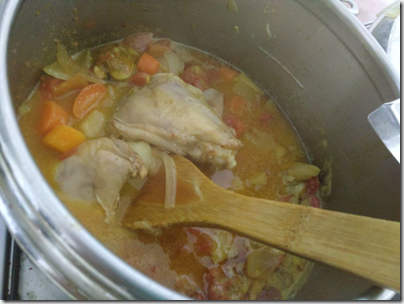 Dish it up with some rice (it would have been prettier with plain white jasmine or basmati rice, but this is oven-baked arborio with broccoli)… 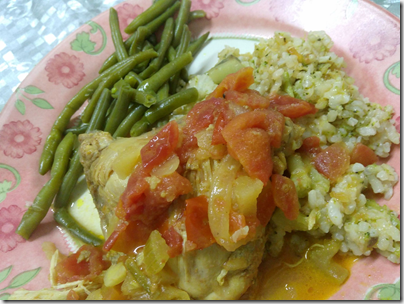 And enjoy!
Here’s how you can make this at home:

Hopefully this picture can guide you a bit when it comes to the quantities:
pressure_ingreds
(you’ll notice I used coconut cream here – it was all I had in the house!)
Frozen ginger, fresh-ground garlic – perfect!
pressure_gingerphoto Serve over rice and enjoy the celebration of fresh, fabulous flavours even in the depths of winter!