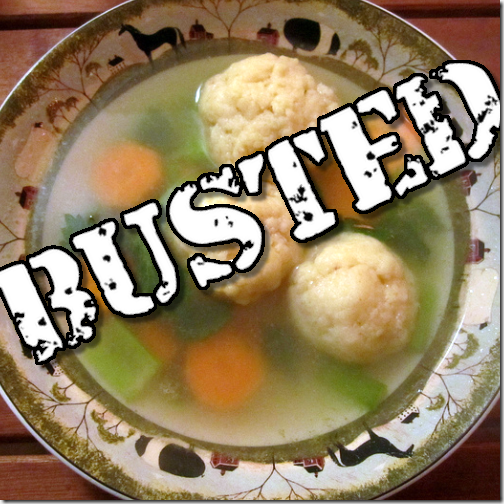 Are you making your chicken soup all wrong???

If you're like me, you've always believed chicken soup has to cook low and slow -- the lower and slower the better.  Who doesn't know that?

But after I shared here about my recent experience using the pressure cooker to create a dish that I might ordinarily have used the crockpot for, I went back and read the article by food wizard Kenji Lopez-Alt about why pressure cookers totally knock slow cookers out of the water.

And his main example is... chicken soup.

Well, stock, but hey, you say potato, I say po-taaaaa-toe.  Because what is our trusty Shabbos soup if not stock with some veggies and kneidlach tossed in?

Either way, by Friday morning, the soup is chilled in the fridge ready to go, ideally all jellied up.

But after reading Kenji Lopez-Alt's post about using the pressure cooker to make stock, I couldn't resist.

So when the bones arrived this afternoon -- one tray of turkey necks, and one tray of wings, total cost 34.90 nis = $9.34 -- I stuck them into the pressure cooker instead of the crock pot or pot on the stove (our crock pot is really too small for soup anyway).

Filled it up to the line with water and added salt and pepper.
Turned on the heat. 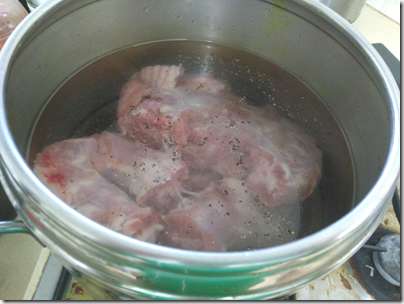 It took a few minutes to let the pressure out (as I said in my last post, when you hear "30 minutes in the pressure cooker," don't think you're going to be eating in exactly 30 minutes -- you'll need add about 10 minutes to get up to pressure and 10 to get back down), but when it did, I had... well, chicken soup. 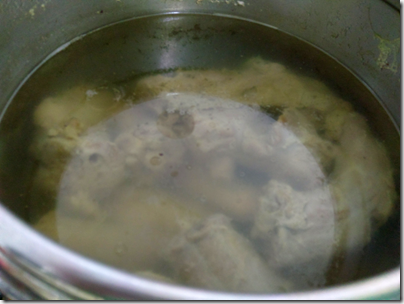 The magic part is that instead of having it simmering for six or seven or eight hours, the soup was literally chilling in the fridge one and a half hours after the bones were delivered.  90 minutes, start to finish, and that was with quite a bit of dawdling and greeting the kids when they got home from school.

I honestly can't tell the difference between the long-cooked and fast-pressure-cooked soup.  The colour is nice, though not as rich and yellow as I'd like.  It looks like soup, it smells like soup.  It's still only Wednesday, so I won't know how jellied it gets for a couple of days yet.  I hope to report back then! 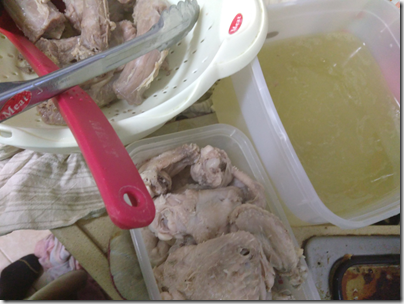 (Turkey bones in strainer, wings in container, soup in container – all ready for the fridge!)

Finally... a bonus for loyal readers:

One frugal trick I've been doing lately (that's not really a trick):  saving the wings.  If you're patient and take about ten minutes to get the meat off the bones, they can be a pretty filling base for a whole other meal.

What can you make with the meat off the wings?  Stir fries, pot pies, various kinds of rolls and wraps and whatnot.  And honestly, for 14 shekels, a little under $4, that's an extremely frugal meal even if you dress it up a little with a storebought pie pastry.  (It’s hard to see in the picture above, but this container is QUITE full -- even after taking out the bones, there’s quite a bit of meat in there.)

So what do you think?

Have you tried pressure cooker chicken soup?  Would you ever give up low and slow if the science said (as Kenji Lopez-Alt says it does) that you get richer, tastier results in a fraction of the time in a pressure cooker?

Let me know in the comments!