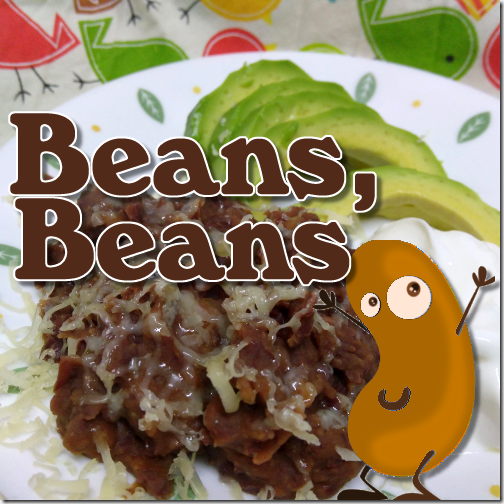 I don't know what I did right, and I certainly don't want to ask too many questions for fear of jinxing it, but the truth is... shhh... my family LOVES beans.

And that has made refried beans (or, as the people who invented them call them, frijoles refritos) one of our go-to favourites for after-school eating, especially in chilly weather, that both warms them up and tides them over until suppertime.

The truth is that refritos are sometimes good enough to make converts even of devout non bean lovers.  Try it and see, even if other bean recipes haven’t gone over as well.  The long cooking time gives the beans a magical “powdery” texture that isn’t really beany at all (at least, in our opinion here!).

These refried beans are basically a one-ingredient, one-pan recipe.   I strongly recommend a

sturdy cast-iron skillet for no sticking and no burning.  And you will need a food processor, even though traditionally refried beans are mashed, not ground up.  Whatever, we’re in a hurry to get those kids fed! 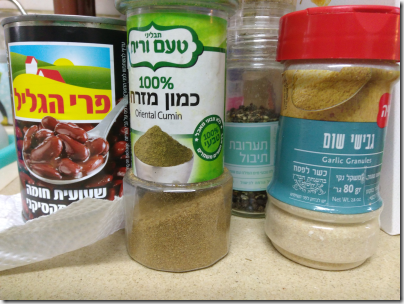 Refritos are also a great palatte for creativity, because you can dress them up basically with whatever you have on hand: sour cream, thick shamenet (cream that passes for sour cream in Israel even though it isn’t), fresh avocado or guacamole, techina, really, whatever you have.  And if you roll it all up in a fresh corn or wheat flour tortilla, you have a delicious (vegan) burrito!

Serve with rice for a complete, filling, and nutritious meal that will feed your whole family for under 10 shekels ( = a couple of bucks).

Here in Israel, we're lucky enough to have a one-can option: delicious brown beans in "Mexican-flavoured" sauce.  If you don't have these, use any tinned beans you like (kidney, brown, white) along with the flavouring of your choice -- taco seasoning, chili powder, etc. to taste.

I feel almost ashamed sharing the "recipe" with you, because like most of my recipes, it really isn't one.  But here goes...

(I know, I know – but I’m not going to count water and spices as ingredients and neither are you for the time being…)

As they fry up in the skillet, the beans will basically go from very, very watery… 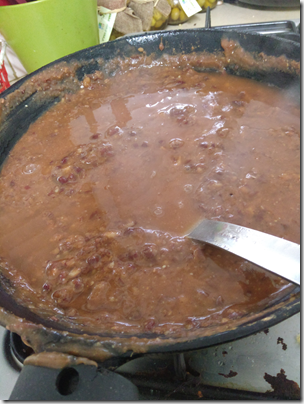 (don’t leave the metal spatula in there – it will get scalding hot!)

To nice and stiff and dry: 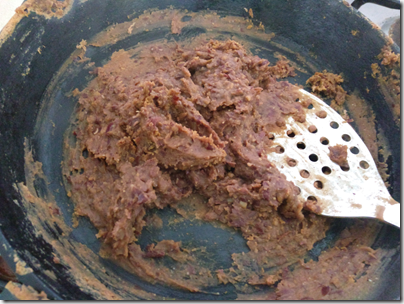 Doesn’t that look like a mess?  But don’t worry – if you’re scared you’ll never get that skillet clean again, here’s a quick tip:  Boil a kettle full of water, pour it in, and cover.  If your cast-iron skillet is well-seasoned and well-loved, it should just wipe out with minimal scrubbing after maybe half an hour of steam-soaking. So there you go – you get a recipe and a shiny-clean cast-iron skillet tip all in one.