The Kosher Cauliflower Nuggets Revolution: Have you been assimilated? 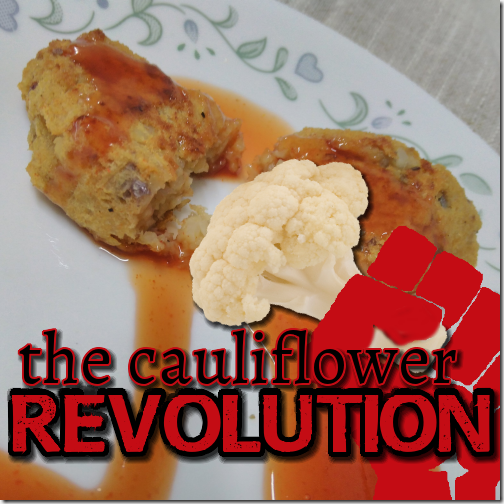 Have you tried cauliflower lately?

I know, it’s been around for a bazillion years, but trust me – today’s cauliflower ain’t, as they say, your bubby’s cauliflower, steamed or boiled, mushy, drenched in cheese sauce.  Not that there’s anything wrong with cheese sauce (slurp!).

I admit I'm a latecomer to the cauliflower revolution.  But this versatile veg, which is showing up these days in everything from pizza crusts to vegan tacos, has won me over totally and utterly.

I mean, honestly, what's not to love?

- You can buy it frozen (no checking for bugs!) and just cook normally
- It's colourless so it can look like whatever you want
- It happily takes on the flavours of whatever you cook it with
- It's low-carb (okay, I don't care about this one much, but some people do!)

I mean, basically, cauliflower is the tofu of veggies.  Or, like the midrash says about mann (manna), the food the Jewish people ate in the desert, if you were righteous enough it could taste like anything you wanted.

I guess I’m pretty righteous.  Aren’t you?  And virtuous, if you’re adding cauliflower, which is a super-healthy cruciferous vegetable to your diet.  Pat yourself on the back!

But wait a second – just like with tofu and other bland-neutral foods, it's only healthy if you don't weigh it down with a ton of oil, processed flour, and whatnot.  If you bread it and deep-fry it, it will be yummy, but it won't be "health food," as such.

Since we had some in the freezer left over from the Spicy Cauliflower Bites we gobbled up the other day, I decided to make cauliflower nuggets (aka croquettes) for the kids’ after school lunch today.  (In honour of the second-last day of school I decided to get my act together!) 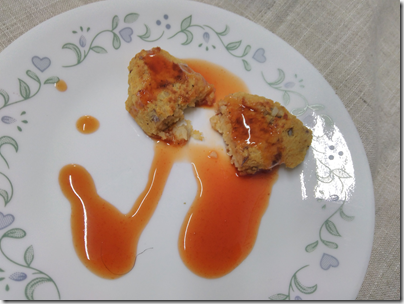 These croquettes are a fabulously easy homemade replacement for storebought shnitzel, a staple food here in Israel, and also for tuna patties of various kinds.  They'd probably also work well with the addition of a little bit of thawed frozen spinach, for variety, or even other veg like frozen peas and carrots or frozen corn (don't puree them with the rest of the mixture, just stir in before forming croquettes!).

I adapted these “Cauliflower Tots” from Just a Taste, dubbing them “nuggets” because it’s more fun, making my nuggets pareve, and playing around with the seasoning a little, then baked them up quickly in the oven.  The whole project (not counting thawing the frozen cauliflower for a few minutes first) took under 1/2 an hour, start to finish, using the food processor, and they turned out absolutely delicious.  They hit that “need-something-savoury” spot just oh-so-perfectly round about mid-afternoon and you feel virtuous because unlike regular nuggets they’re not fried or heavy with chickeny greasiness.

All vegetables, all deliciousness, all the time!  I’d imagine they’d be easy to make vegan by using whatever egg substitute you prefer.  There’s only 1 egg, and in fact, because they’re not deep-fried, they might hold together fine without anything, but I wouldn’t necessarily want to risk it. 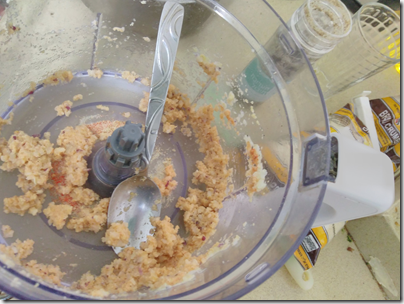 (oops, didn’t realize I was going to take pics until the mixture was almost used up!)

I'm not going to list quantities here, because I wasn't keeping track.  You can find proportions in the original recipe or just

mix all the ingredients EXCEPT the bread crumbs, then add them in after the other ingredients, using only enough so you have a soft mixture that is firm enough to pick up in your hand and make balls / croquettes out of, but not overly dry. 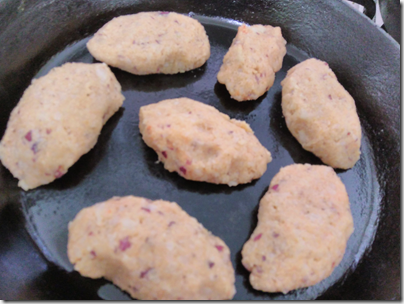 (Uncooked, they look a little like handmade gefilte fish, don’t they?)

- Frozen cauliflower (slightly thawed so it will puree better)
- Onion (I used half, and purple, because it's all I had... don't go overboard on the onion)
- Egg
- Bread crumbs
- Seasonings:  salt, pepper, paprika, garlic powder

1.  With steel blade of food processor, buzz all ingredients together except bread crumbs.
2.  Add enough bread crumbs to make a soft mixture that is firm enough to form balls / croquettes.
3.  Form into balls / croquettes and place on well-oiled pan or skillet. (I used my trusty cast-iron skilet because it was already out, but forgot to oil it down a little first, so they stuck just a little.)
4.  Bake in oven preheated to 350F / 170C or slightly hotter, 14 minutes per side, turning in between.
5.  Serve with ketchup or drizzle with this incredibly delicious honey-sriracha sauce, which is basicaly turbo-charged ketchup. 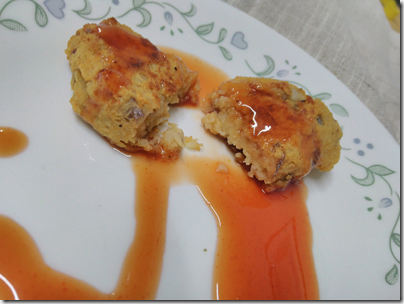