The taste of fall: Easy homemade apple cider without a juicer! 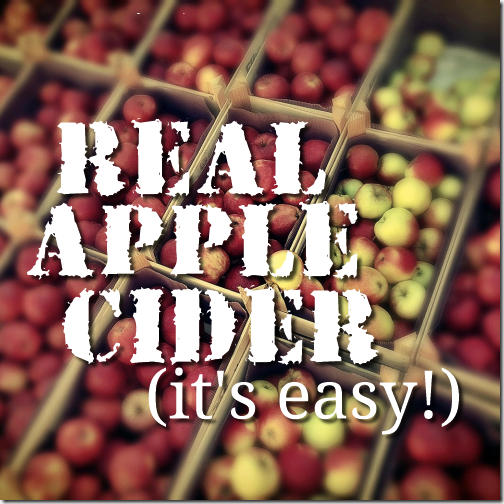 Here in Israel, we miss lots of the familiar tastes of the seasons, but mostly, we get by.  We adapt and learn to enjoy new flavours, like the way Naomi Rivka will stash a few fresh dates in the freezer for a couple of hours and then take them out and mash them into “sorbet.”  Or like chummus – NOT!

One of the things I love in the sukkah, besides a cool breeze (since there’s no hope for that where we are) is real apple cider.  We drink it, but it’s also a crucial ingredient in my Yom Tov Squash Soup.  Or at least it WAS, before we moved to Israel.

There really is no substitute for cider.  If you’re from the Northeast or some other fall-colours, cool-weather kind of place, hopefully you’ll agree.  They sell alcoholic cider in the liquor stores here, but it’s more like bubbly-sweet apple juice than anything I would call cider.  Apple juice is kids’ stuff, but cider has sass – it’s all grown up.  It’s sweet but spicy; spunkier than apple juice and fuller in body and texture.

And since we came here, it’s been impossible to obtain.
Oh, sure, there may be some kind of health-food store in the centre of the country that stocks a nice, cloudy apple juice.  But – repeat after me – it’s Not The Same.  And I didn’t know that there was any way – short of some kind of press or fancy juicer contraption – to make it myself.

But today… I learned that I was wrong.

And the great news is – wait for it – it’s SUPER easy.  You’ll need 10 apples, a big pot, a sieve, and some cheesecloth.  I don’t have a big pot, so I used a too-small pot and it was okay.  Cheesecloth can be hard to find in Israel; I ordered mine years ago from Aliexpress and still have a stash here.

I forgot to take pictures of the first step, but basically, you scrub the apples well and quarter them. 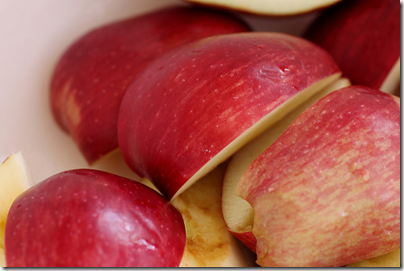 I used Gala apples, but I don’t know if it makes a difference.  I threw in everything but the stems – peels, seeds, everything - into the too-small pot.  Spice it up with cinnamon – I used powdered here, but I think sticks might work better – and allspice; I used about a tablespoon of each.  Don’t add sugar – there’s no need; it’s plenty sweet enough as is.  (and plus, if by some chance, your apples aren’t sweet enough, you can always add sugar later.)

Add enough water to cover… or whatever.  Lots of the water splashed out because the pot was too small. 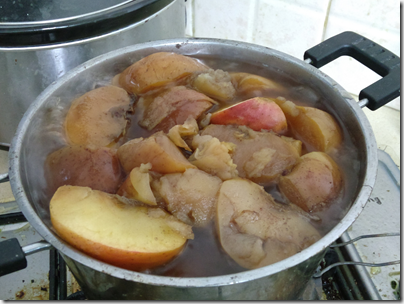 Boil it uncovered for an hour.  Then, cover and simmer on low for another two hours.  The apples are going to look disgusting when they’re done.

Dump the apples out into a strainer.  I sort of lined it with cheesecloth first: 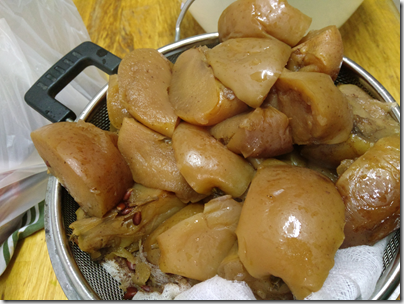 Let the liquid run off until the apples have cooled quite a bit – maybe about half an hour.

Toss the apples, then run the cider through the cheesecloth until it’s a little clearer and there are no apple bits left in it.

Now decant the cider into a pitcher with a lid (so it doesn’t pick up chummus tastes from the fridge!).  But before you put it away, don’t forget to pour some off for tasting!!! 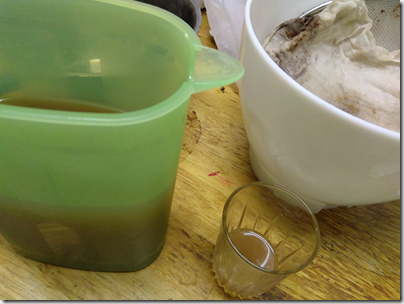 Mmm… delicious.  All told, what with scrubbing, boiling, and straining, maybe ten minutes’ work.  Fifteen if you count stirring the pot every once in a while as it boiled.

And so, so worth it.

Serve warm or cold, with or without cinnamon sticks, orange slices, whiskey, or use in any recipes that call for sweet cider, which I think just means it’s non-alcoholic.  Or… just drink!  (Who knew?)