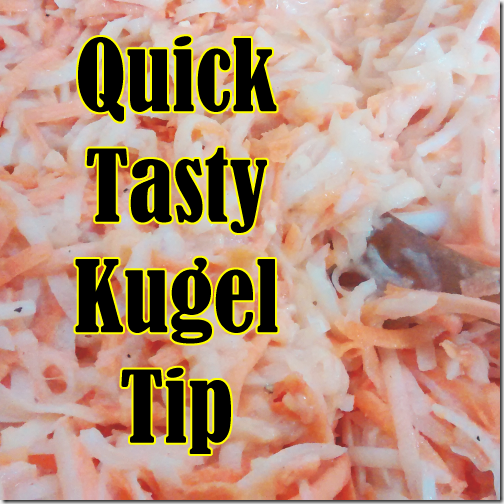 If you’re like me and cook by intuition, it can be hard to know when a kugel is just right to go into the oven.  How do you know you’ve added enough salt and other seasonings?  You don’t want to accidentally go overboard, but how much is enough?  And you certainly don’t want to invest all that effort and bake the thing for an hour or whatever only to discover that it tastes bland as paste.

Of course, you could just take a taste of the raw mixture, but somehow, that option has never seemed appealing to me.

So what can you do?

This isn’t a fancy tip, but it’s one has helped me so much over the years.  I think it will come in handy for you in all sorts of ways – not just with kugels, but also with gefilte fish, cakes, cookies, breads; anything you don’t want to sample raw for whatever reason.

(Lots of real bakers eat raw bread dough, even sourdough, and claim to love it… I am not one of them, and the thought of eating raw flour products seems just icky to me.  My 9-year-old son GZ, on the other hand, has been known to make himself raw pasta out of flour and water just so he can eat it raw.)

So anyway – if you don’t want to eat it raw, this is what you do:  FRY UP SOME OF THE MIXTURE IN A PAN.

Yes, it really is that easy and obvious.

I heat up whatever skillet I have handy – preferably cast-iron, but that’s only because I love my cast-iron skillets so very much.  Then, I drop some of the mixture in, cook one side, and flip it.  At that point, it’s usually just about ready.  Take it out, allow to cool for a few seconds (or flap it around in the air if you’re in a hurry), then taste.

When you’re frying up a potato kugel like this, it can look a whole lot like latkes. 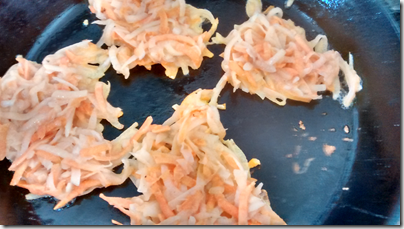 And flipping them over to brown on both sides: 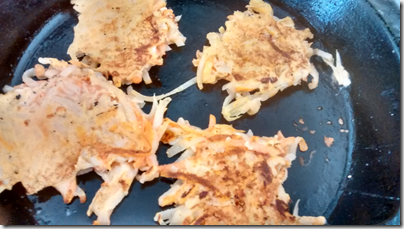 Indeed, I have often been known to serve my family “sneak-preview” latkes on a Friday afternoon.  They’re usually a welcome snack on a late-Shabbos Friday when everybody is kind of snackish and prowling in search of food.

In this case, I was making an extremely large kugel for a simcha that friends of ours were having.  A kugel so large that I realized that the stupid Israeli tinfoil pans wouldn’t hold it, so I had to double it up and support the bottom, and even then, it almost collapsed and I could barely fit it into my oven.  Thinking twice, I should probably have made two smaller kugels, which would also have been easier to store in the fridge… but thank goodness, everything worked out.

In the course of making this giant kugel, I realized didn’t have any bowls big enough, so I scrubbed out the pareve dish basin and used that as a mixing bowl.  And I really, REALLY didn’t want to haul this thing off the blech and over to the shul across the street only to have it tasting like nothing.  So it was important that it be seasoned ENOUGH.  (Why scrub it well, if that’s what we use to clean the dishes with?  I don’t know; it’s not that it was dirty at ALL; it just bothered me using it without a good cleaning and rinse…) 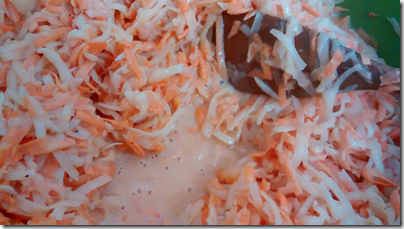 (See the green dish basin in the background?)

It took me three tries – adding salt and pepper (and a little paprika), frying up a few little latkes, tasting, and then adding more seasonings – until I got it just right.  My family happily ate the “latkes”… and the kugel itself got lots of compliments the next day in shul.

(not exactly a recipe)

The key to well-mixed kugel is that you want a stirring implement that’s not going to fuss or get caught on the bits.  The two mixing tool choices I’ve suggested here are just about ideal for mixing all those lumpy vegetable pieces together.

Now, you’d think that as an experienced food blogger, I’d have a picture of this legendary giant kugel.  But no.  Sorry!

But I do have one more cool tip for you, just as a bonus (I learned this on a cooking show long ago):  Food which is going to be served cold should be seasoned a little “extra” – more salt or whatever, when you’re cooking or preparing it, because your tongue can’t pick up the flavourings as well when food is cold.  So even if something tastes perfect when it’s hot, once it’s cooled off, it may end up tasting bland.  This is a useful tip for something like gefilte fish, as well as salads.

Yes, it’s true that you can always add salt.  But there is something disheartening about biting into something that’s supposed to have flavour only to find that it doesn’t.  Like the legend about the king whose daughter said she loved him as much as salt, it is something you take for granted… until suddenly, your food doesn’t have it and you realize you can’t really enjoy life without it.

There is also the thought, from Rabbi Nachman of Breslov (via Esther Sender in this article), that “prayer is as powerful, potent, and real as moving a salt shaker from one end of the table to the other.”