I made the hot viral muffins! Flourless, pareve, practically instant… but are they tasty??? 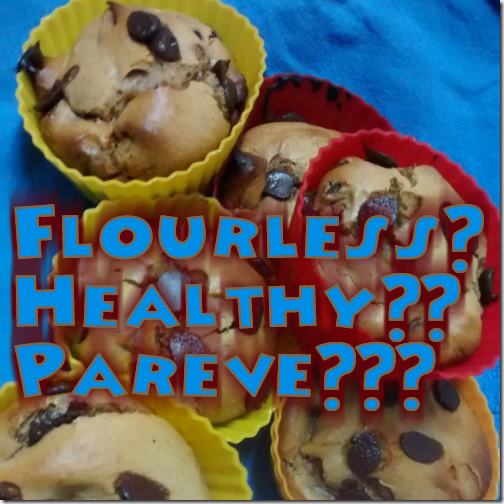 I did it – I couldn’t resist even a second longer:  I made the hot viral muffins!

Don’t you love the way eye-catching food has gone viral lately?  If you’re like me, you’ve got videos all over your Facebook feed of recipes assembled in seconds using healthy, colourful ingredients.  Just drizzle stuff in olive oil, into the oven it goes, and thirty seconds later, you’ve got the World’s Best Popsicles – or something.

(I’m sure this is a product of my demographic – if I was a teenage boy, no doubt I wouldn’t get quite so many recipes, and quite a few more brightly animated game images or whatever.)

From starters to entrees, from soups and salads to stews and desserts, I’m sure seen these videos and sat there drooling like me, wondering if it could possibly be THAT easy and taste as good as they say.

Today’s gorgeous post, the one which caught my eye, at least, came from a site called Averie Cooks, promised Flourless Peanut Butter Chocolate Chip Mini Blender Muffins. Which has got to be a record for number of adjectives used to describe a food product (click the link to see the original post). 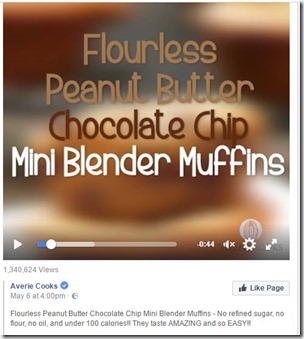 I was intrigued, and after watching the video, I clicked through to Averie’s site to see what was involved.

I discovered that basically, they’re muffins (the noun at the end gives it away!) with nothing in them except a few things.

This is a pretty typical recipe, in that there are many “variations” of this recipe online, most of which are identical.  So if you can’t find the original, just hunt around until you see one with this combination.  Anyway, it all sounded simple enough, and I happened to have some almost-overdue bananas sitting around waiting to discover their purpose in life.

You’re supposed to just whip everything together in the blender, but

After opening the thing up to manually slice the banana really small because the steel blade was just taking it for a nice spinny ride, I ended up with a smooth paste that looked a lot like… peanut butter. I stirred in a few chocolate chips (um, okay, maybe more than a few), and plopped the mixture into silicone muffin tin liners (I spray the muffin tin liners as well, though it’s probably not necessary).

Averie offers the really helpful tip of adding a few chips directly to the top of your muffins for a nicer look, which I’ve never thought of doing. So I did.

So… what have we here in our “healthy” no-refined-sugar muffins??? Hmm.

I don’t have a mini muffin pan, so here, this made 6 small muffins in regular-sized muffin cups. They were fine, but because the centre is a little gooey, I agree with the recommendation to use a mini-muffin pan if you have one. You could also just buy silicone mini muffin tin liners and stand them up on a cookie sheet. (I was a reluctant convert to silicone, but use it sometimes with great joy now.)

Because mine were bigger, I baked them a bit longer than the recommended 7-9 minutes. Bake these hot, like around 400F (200C here in Israel).  I let them get fairly dark because I wanted them fluffy, not mushy, inside. 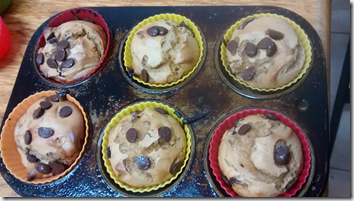 I was actually pretty impressed.  They were a little lumpy, but generally had nice, domed tops and sort of looked like muffins, not like some weird healthy thing.

After they cooled, it was SAMPLING TIME. Were these viral muffins as good as they looked in the video???

Honestly, I don’t think it’s exactly a fair test, because once you dump melty chocolate chips into something, it automatically turns delicious. 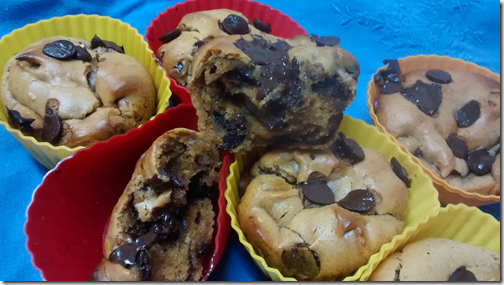 Yum – chocolate chips on top AND inside!

So how were they???  Because I know you’re wondering.

I must say – these were pretty good. They have a satisfying fluffiness even though there’s no flour, and that always-rewarding combination of salty and sweet. Grownups will probably like them better than most cookies because they’re not too sweet, especially if you don’t overdo it with the chocolate chips like I did.  Also - as I read elsewhere, you really can’t taste the banana, so even kids who don’t love “healthy” stuff won’t suspect that you’ve crammed on in here.

I can really see these being a great wintertime alternative to the kids’ favourite PB-banana smoothies when they come home from school and are feeling snackish. Seeing as how we’re heading into summer, these might not be the greatest recipe to have around, but a handy recipe if you have a certain set of ingredients and want to bake something without a ton of processed sugar added.

In case you missed it above, here’s a link to the recipe on Averie’s site.

You could probably play around with this recipe, experiment with different add-ins. If you have a quick and handy recipe that’s a little healthier than the usual, feel free to share it in the Comments below!