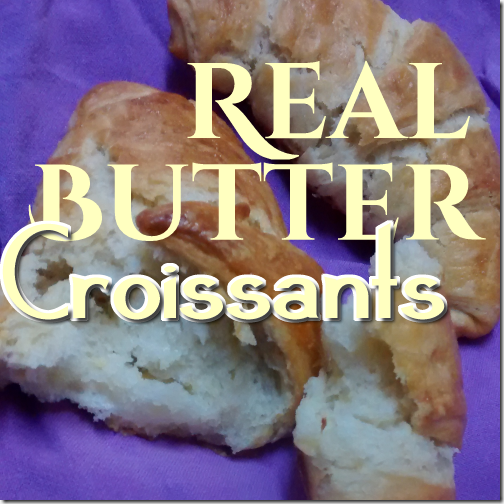 Most of the baking I do is pareve, and usually, I don’t mind.  But sometimes, I come across a baking or bread idea that absolutely must use dairy.  Must must must.  No substitutions.

Naomi Rivka is taking a baking course right now and she bakes a lot of dairy.  She’ll bring home the recipe and excitedly ask, “Can we make this for Shabbos?”  And I look at the kilo of butter or whatever in the ingredients and say, “Not this week, we’re having fleishiks…”  She keeps saying we can use margarine instead, and my standard line for this is:

“Margarine is NOT pareve butter.”

I think you’ll agree.  Margarine can be USEFUL in kosher baking, but it most definitely isn’t butter.  And when what you want is the flavour of butter – there’s nothing like it in the world – then what you need to start with is… butter.

Baking croissants not only takes genuine DAIRY, it also takes a second ingredient I don’t usually have:  PATIENCE.

So you can see why I let it slide for like 20 years, right?  But today, falling as it does during the mysterious period between Purim and Pesach when people are Thinking About Bread Products, I decided to go for it at last.

I didn’t use a recipe, video, article, cookbook… anything.  Just made a quick eggless, sugarless, oil-less dough, rolled out a block of butter, and before I could lose my nerve, combined them into a thousand layers of dairy-baking goodness.

I may have been in some kind of butter-induced trance, because I didn’t even take any pictures until I had gotten well into the process.  I had already rolled the “sandwich” out and cut it twice, I think, stacking up the layers, before I thought to immortalize my creation: 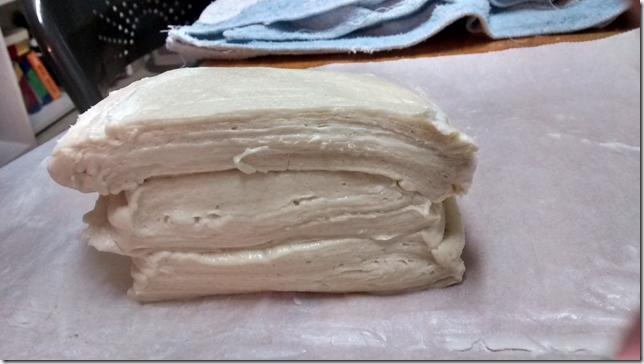 Essentially, from this point, I rolled the layers out thin (between parchment), then cut it in 3 and stacked up the thirds.  You can fold it, but I didn’t.  As per my usual, I wasn’t too careful about what shape things turned out in: 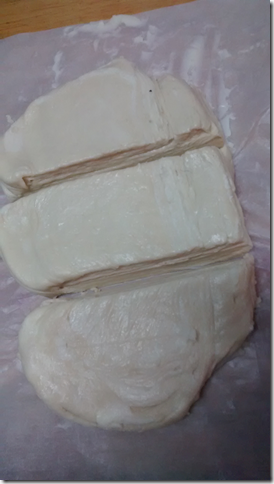 Pretty ugly, right?  You can fix anything with a rolling pin!  Also, it all looks disgusting mushed up together in your stomach anyway, so why even bother, amIright…?

Here’s the next “sandwich.”  You can sort of see that there are more layers here than there were up above: 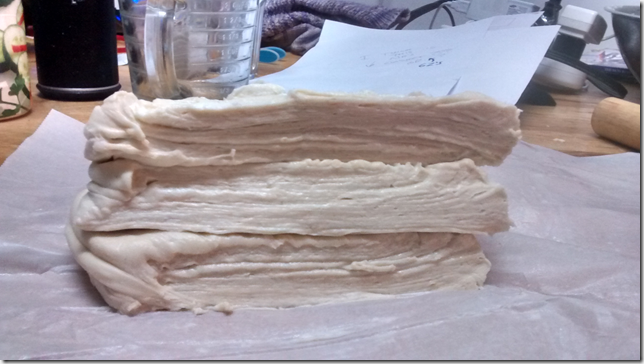 At this point, I rolled it into a flat circle and tossed it into the fridge to rest.

While it rested, I decided that spontaneity was all well and good, but I should really find out how the pros do it.  I found this video helpful, and she gives proportions and everything, in case you want to try it at home:

Now, slowly add 250ml milk and another 50g of flour, mixing until you  have a soft ball.

(my food processor is pareve, so I wouldn't have been able to do this anyway)

She recommends longer wait times than I did, but I think mine turned out very nicely and puffed up well anyway.

Once my dough was finished in the fridge (NOT the hour she recommends – I was hungry!) I rolled it out the way the video suggests – kind of: 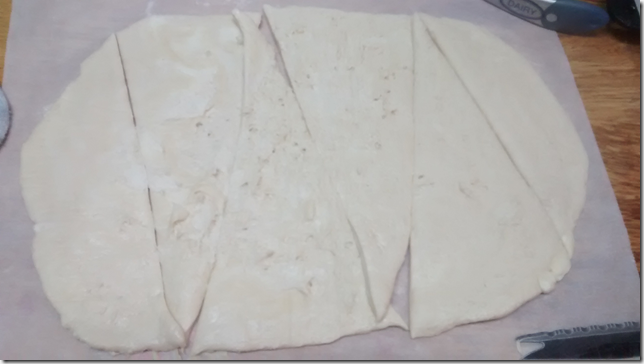 Because I started with a circle, I got four nice big triangles of dough and two weird round end pieces.  I didn’t take a picture (another butter-induced trance!), but I ended up bisecting each of these into TWO crude triangles.  So once I rolled it all up, I ended up with 4 large croissants and 4 small ones: 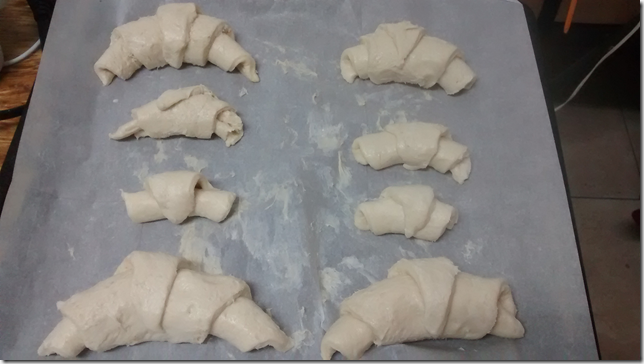 I probably should have rolled these thinner, but the dough was sticking to the parchment paper (as you can see by all the stuck-on dough around the croissants!) and I was getting very, very hungry.  I would really recommend plastic wrap for this, because parchment paper gets kind of sad, all damp and floppy, over a long period of use, and it WILL stick.  But I’m in Israel, where the plastic wrap is pretty bad, so there you are.

I let them puff up – not for the 1-3 hours suggested in the video, but half-ish of an hour.  It was enough; they were nice and puffy!

Brush with egg, bake for 1/2 an hour, and waaah-laaah… 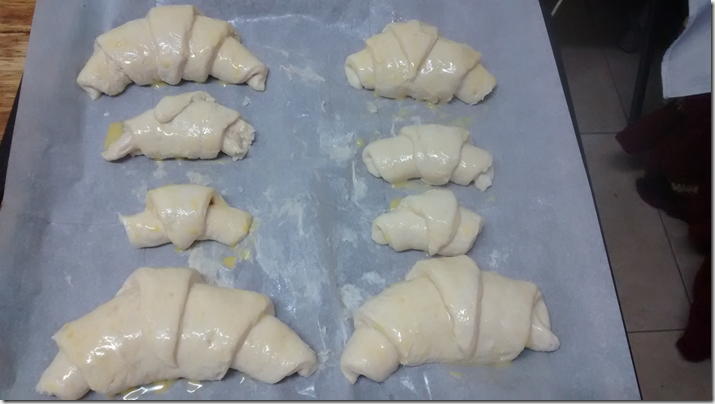 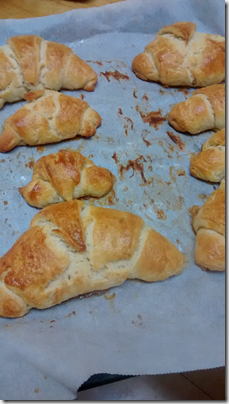 My homemade croissants, I’ll admit, were a little more puffy and bread-like, rather than flaky like the classic.  That may have been because I didn’t chill the layers enough in between roll-outs, or because I used more yeast than I should have.

But I will tell you – biting into the first one?  Flaky, fluffy, slice of dairy-baking heaven. 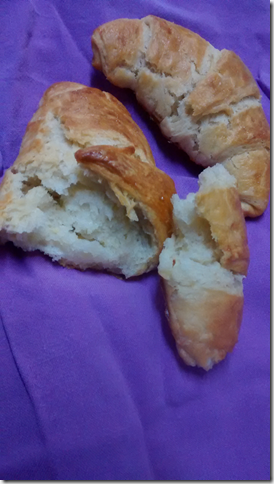 Naomi Rivka’s first question was, “How did you get it so crunchy on the outside?”  They were – perfectly crisp outside, and nicely soft and buttery inside.  Yes, a little more like a buttery dinner roll.  But seriously not bad for a first attempt.

Will I make homemade croissants again?  Maybe.  I certainly don’t buy them too often, because the pareve croissant vibe is simply too depressing.  (Unless they’re filled with almond paste, which is another story altogether!  But then, I suspect the best almond ones are dairy anyway…)