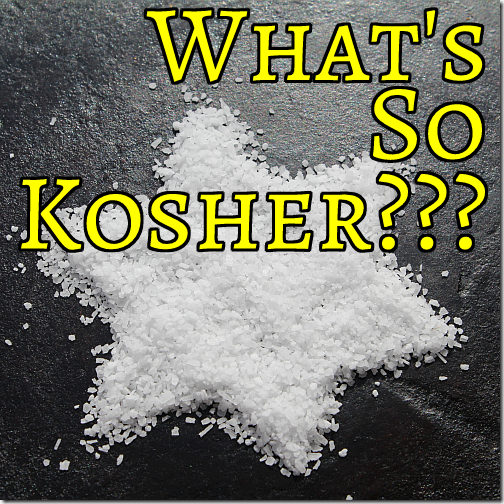 It's taken over the gourmet world.  You pretty much wouldn't write a recipe that includes salt without it.  It's also an annoying fact of life for those of us googling "kosher" recipes - that yummy salt bumps up almost every recipe to the top of the list even if it's a recipe for bacon double cheeseburgers.

First of all, you may already know that "kosher" salt is no more or less kosher than any other salt.  That is, it's kosher, but so is table salt, coarse salt, sea salt, Himalayan pink mountain salt, and every other form of pure salt.

So if you eat kosher and cook kosher, you CAN use kosher salt.  But you don’t have to.

So why is it called kosher?

That’s actually just a mistake.  This flattish crystalline form of salt is actually kosher-ING salt - the kind of salt used to "kasher" meat to make it kosher.

Most kosher salt has air between relatively flat crystals.  So when you're using or substituting kosher salt, use "more" of it - the same amount by weight looks like more on a spoon, so 2 tsp of regular table salt will be just as salty as 1 tbsp or more of kosher salt.  Many people claim it has a “lighter” flavour, but in reality, it tastes the same as any other salt – you’re just using less of it.

Here’s a picture showing a comparison between different types of salt, close-up: 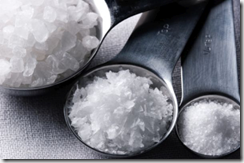 In the U.S., there’s a big difference between the two major brands of kosher salt.  According to Smitten Kitchen, “Morton salt presses salt granules into large flakes with rollers; Diamond, through a patented process, stacks salt pyramids to form a large crystal.”  Yet another reason to measure your salt by weight, not volume.  A spoon is not a spoon is not a spoon.

(Salt carefully when you’re using a new type of salt in a recipe if you don’t want to poison your family!)

So why is it so popular?

Because of the flat, flaky shape of the crystals.

That makes it easier to pick up and control when you're sprinkling it into a dish - that's one reason it's become so popular with chefs and gourmets.  It also looks whiter on your fingertips and in the air, so it may be easier to see how much you’re using (I know I sometimes sprinkle and sprinkle with regular salt and have no idea if it’s doing anything at all).

However, if you're using kosher salt as your main salt when cooking for your family, be careful - it lacks the iodine that the FDA, WHO, etc., recommends.

Also, beware of the hype when you’re buying any “special” salt, especially if it’s expensive.  A couple of blind taste tests suggest that even gourmets can’t really tell the difference most of the time.  Here’s one blind taste test from Cook’s Illustrated.

When should you use kosher salt?

(For most of these uses, except for kashering meat, you can substitute sea salt, Himalayan salt or any other gourmet salt you’d like.)

When doesn't it matter?

When shouldn't you use kosher salt?

What are your awesome salt secrets?  Go ahead and dish!