Homemade “No Corn Syrup!” Kosher Marshmallows (without all the patchke) 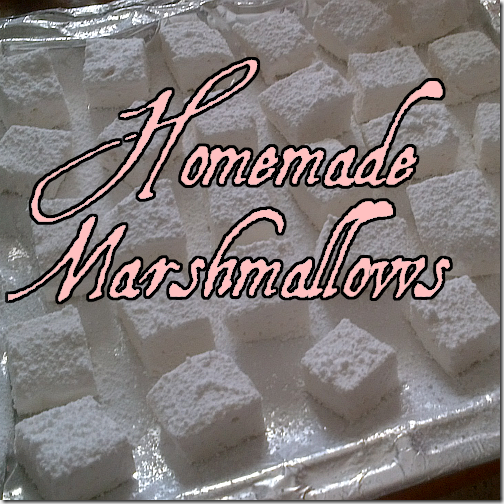 I’ve always loved the way Shoshana at Couldn’t be Parve turns out gorgeous gourmet marshmallows in flavours like Blood Orange, Rose and Raspberry Lemonade.  She makes it look easy, and the truth is, I’ve followed her recipes and they’re not difficult.

But as with most marshmallow recipes, they involve hauling out a thermometer (and I don’t have a real candy thermometer, just a digital one that I dunk into things as needed).

Most marshmallow recipes also call for corn syrup, though Shoshana does offer a liquid invert sugar “marshmallow syrup” recipe that I’ve used several times.  It works, but it involves extra steps that add to the “patchke” of making marshmallows from scratch.

When we were invited to gluten-free friends for lunch, I saw it as a great opportunity to make marshmallows again.  But I REALLY wasn’t looking forward to monitoring the temperature or doing the invert-sugar step.  Out of curiosity, I started googling thermometer-free recipes, and found this one, which was also – as a bonus – corn-syrup free as well.

I missed photographing the early steps of prepping this, but it’s very straightforward.

Before you start, you will need:

I used the last package of our Kolatin gelatin from Canada.  It expired about a year ago, so I tested it first by mixing it with a little water, and it set up just fine.  If it hadn’t, there is gelatin available in stores here in Israel as well.

Here is the gelatin, mixed with water. 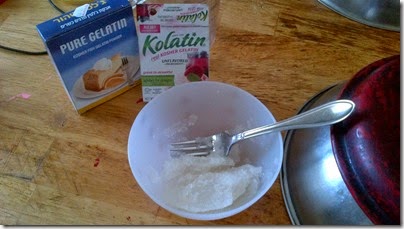 (Don’t ask me, by the way, why gelatin is pareve.  It comes from animals… but apparently changes sufficiently that it is no longer considered an animal product?  If you can explain this, let me know in the comments!)

Basically, you dissolve a massive amount of sugar in a little water, add the gelatin mixture, and bring it to a boil.  Once it boils, you can turn it off.  No thermometer necessary!  (Why do most recipes call for a thermometer?  I now have no idea!)

Then, you add in whatever flavour you want to use (I did vanilla, because my sister brought me some nice real vanilla from Canada), and whip it up for 15 minutes.  After that, you have this beautiful, pillowy mixture which you spread out in a pan to set: 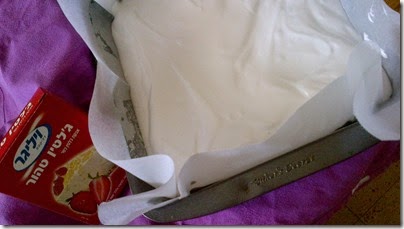 I used parchment paper, which I sprayed with oil, then sprinkled with icing (confectioner’s, powdered) sugar, to make sure it would come out easily when it was done.

When it’s set, tip it out onto a cutting board, dust with more icing sugar, and slice.  I used this sharp little knife and it cut cleanly, without too much sticking. 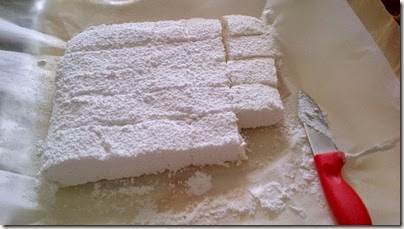 Because the mixture still felt jiggly, I spread the individual marshmallows out on a pan to set and firm up a little, sprinkling with even more icing sugar. 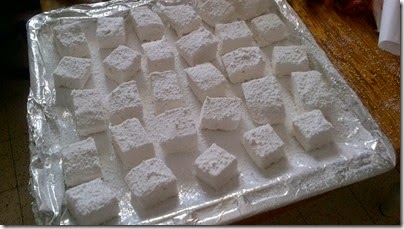 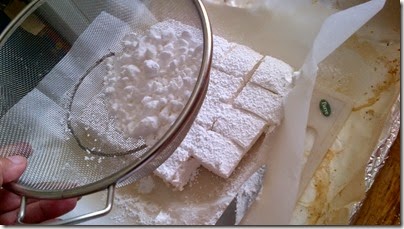 TIP:  use a sifter so you won’t get icing-sugar lumps everywhere!

So how did they turn out? 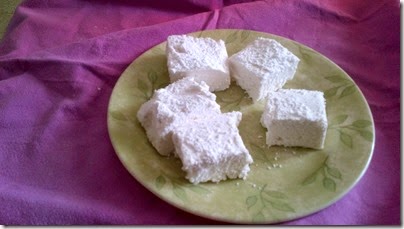 Yummy homemade marshmallows… without all the patchke!  Okay, some of the patchke.  But not all. :-)

How do they compare to thermometer / corn-syrup marshmallows?

These seem to be setting at least as well as the thermometer ones, and the corn syrup ones.  Maybe they’re a little on the softer side… but I cannot be sure.  And looking back at my old blog post from the LAST time I made marshmallows, I rated it an 11 out of 10 for potchkedik, and said it was “Definitely a process I’d save for a day with absolutely NOTHING else going on.”

It does, however, look like those marshmallows turned out a little firmer, since I was able to cut little star shapes out of them for Chanukah: 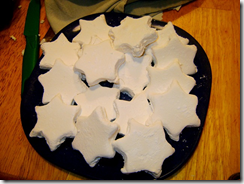 However, then I was stuck with the issue of what to do with the “leftover” marshmallow bits.  I believe the solution was… we ate them. 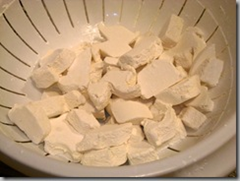 And I also resolved at the time to slice them into squares if I ever made them again… which is exactly what I have done this time around.

Have you made your own marshmallows?  Now that it’s easier than you ever thought, I hope you will.  Let me know how they turn out!