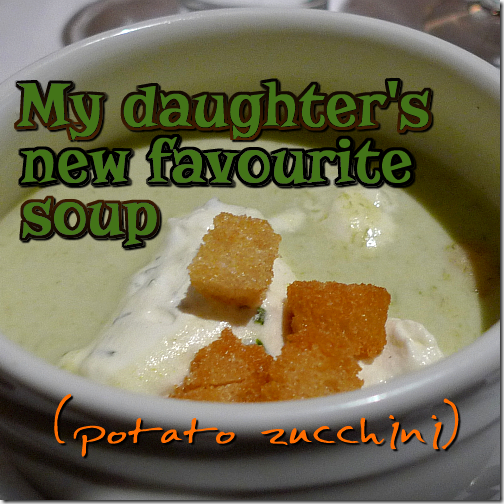 I know I’ve been doing a lot of soups lately.  Forgive me… it’s winter and I could not be happier.

Before we moved to Israel, we got used to inaugurating Soup Season at Sukkos and finishing sometime after Pesach.  Here, Soup Season is way shorter – more like December to February than October to April.  So little time, and so many soups to cram in while we’re still shivering.

This Zucchini-Potato Soup is pareve because it gets its creaminess from pureeing potatoes.  It is super-fast, mainly because you make it in a small batch.  It can easily be doubled, tripled, etc., to serve a crowd.

Did I mention that my daughter is nine?  She found this herself in the cookbook and has actually made it entirely by herself, except for the pureeing part at the end.

If you are just starting out on the soup-making journey, this is the perfect soup for you to start with.  It can be anything you want it to be.  You don’t taste the zucchini, which is perfect, because most of us here don’t love zukes.

If you want something with a stronger flavour, add broccoli and boil it a little longer.  For a bit of colour, add a carrot instead.  This soup essentially cannot be ruined.

It’s adapted from Gatherings: the Netivot HaTorah Day School Cookbook, which is a terrific, sensible cookbook now published by Feldheim.  I am actually mentioned near the back – under my previous name - because I was on the original committee.  (I don’t think I actually did anything, but it’s nice to get credit!) 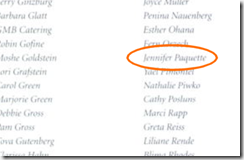 I like this cookbook because it is serious about family-friendly and it’s serious about simplicity.  Take a look at this recipe; I think you’ll agree.

BONUS POINTS:  If you want to get really fancy, caramelize onions ahead of time and sprinkle a few of those on top.