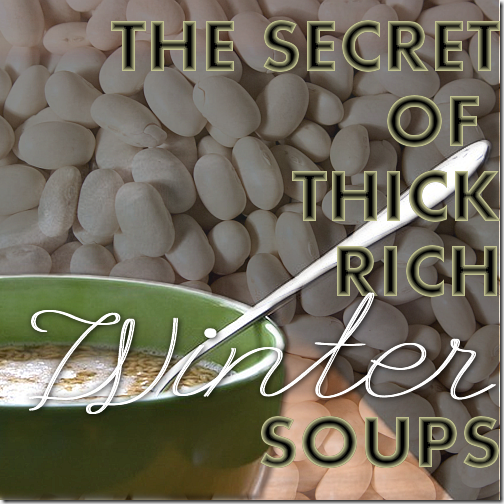 I’m sure you know how to make soup.  Good soup.  Maybe great soup.

(It’s cold outside.  Just close your eyes and think of delicious soup…)

I agree.  You don’t.  Here’s how you can make your current homemade soups even better, without adding a ton of more work. 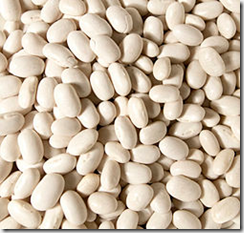 …you guessed it!  WHITE BEANS.

These guys are cheap – practically free if you start with dried (I have been lately, and it’s easier than I would ever have dreamed).  And they make any soup SO much better.

In the past, I would add milk, maybe cream, to soup.  That makes it yummy – pale and creamy.  Mmm!  Who doesn’t love cream soups?

But all that milk or cream doesn’t add much in terms of nutrition.

Do you ever have to thicken soups that come out too runny?  What do you use?  I’ve been known to use flour.  It makes the soup heartier, helps it stick to your ribs, but again, doesn’t add much.  And you have to mix the flour in carefully so it doesn’t make lumps, and then for about ten minutes or it tastes like raw flour.

Also, it doesn’t really make the soup any healthier.

With white beans, cooked ahead of time, you can make any soup richer, creamier and just plain better.  And the best part is – kids (and husbands?) won’t even notice that they’re there.

Just cook the beans, purée them, and you’re good to go.  Okay, if the first part sounds like too much work, then use canned.  They’re not evil, just slightly tinny-tasting now that I’ve snobbed up my palate.  I know they’re a godsend for many busy families.

The important part is puréeing the beans.  All the way.  Really, really well.  When white beans are blendered (with a hand blender or a container blender) well, they turn into a thick white, creamy paste that you can use to thicken any soup.  Make sure you do them for a while so the skins are almost completely blended as well.

I switched to doing this with a carrot soup I’ve made for years.  There isn’t a specific recipe:  start by frying onions, add lots of carrots, some ginger for warmth, some garlic for zip, boil it up until everything is soft and then purée it before serving.  Sometimes, I’ve had to thicken it up with flour.  Sometimes, I stir in cream at the end – either dairy cream or coconut cream if I want it pareve.  Last week, I used white beans for the first time and everybody loved it.

Tonight, I did it with pea soup.  Lots of split peas, barley, carrots, celery and zucchini… and white beans.

You can do it with just about any soup.  The beans add a little flavour, but they add a ton of texture and an easy nutrition boost that you & your family probably won’t notice while you’re enjoying it.

You can even add them to a soup that isn’t puréed, by the way, like pea soup (unblendered), Minestrone or any mixed-vegetable soup, or to a vegetarian stew if you want to add heartiness without wasted calories and carbs.  But I admit, I have been puréeing a lot of soups lately because one child doesn’t like to eat food that has lots of ingredients in it.  (If he can’t see them, he doesn’t know they’re there!)

Ah, sitting around the table, enjoying amazing soup with your family on a chilly winter evening… now that is what life is all about.  There’s no satisfaction like soup satisfaction, is there?

How do you turbo-charge your family’s winter soups?  Do you have any tricks to prevent boredom?  Let me know in the comments!

By the way, YES, I know this blog is called Adventures in BreadLand.  And this post is about SOUP, which isn’t bread (though isn’t it just the perfect accompaniment to a beautiful loaf?).

I’m shifting the focus a little.  I did that a while ago by opening things up to include cakes and cookies.  From now on, you may see other food items popping up here as well.

I have four blogs that I’m maintaining more or less actively.  And for the first time ever, I’m trying to stay on topic so I can develop a better rapport with you and give you what you expect from each site.  What are the topics?