Know what the most popular post on this site is, right at this very moment?  By far?

I adore kichel, the dry unsweetened European cookie that has been a staple of Jewish life since… well, probably since someone’s Bubby needed to make cookies and discovered that she was out of sugar.  Apparently, thousands of people out there on the Internet love kichel and want to know how to make it well at home. 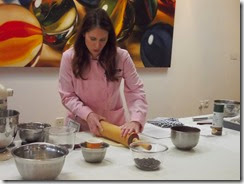 But celebrity kosher baker Paula Shoyer does not.  Which is too bad, because in every other way, she’s absolutely perfect.

I enjoyed a baking demo she did yesterday at the home of the U.S. ambassador to Israel Daniel Shapiro.  She did a really great job of preparing a couple of basic recipes that I hope to share with you very soon.

But the real reason for her crusade to bring simple, delicious pareve baking recipes to home cooks is because, as she said yesterday, “in the U.S., pareve desserts… are absolutely horrific.”

Foremost among the horrors?  The kichels on every table, at every shul kiddush.  Paula did not mince words, describing them as a “dog biscuit with sugar on top.”

Maybe I’m not going to get into a fistfight over kichel.  But you can’t argue with Google, and it seems like people love to not just read about it, but actually bake it at home and eat it.  Even though your search results are private, if you’re one of the hundreds of people who have found this blog by typing “kichel recipe,” “egg kichel,” “the best kichel,” or something similar, then you’ll know what I’m talking about.

As the sweet & charming Paula herself said at the baking demo, “homemade is better.”  Maybe she’s just never had the right homemade kichel, like the ones I just made last week to take to an event.

Mine were delicious… and the great thing is that they’re still fresh now, five days later.  Normally, I won’t eat anything baked that’s much over a day old, but I make exceptions for mandelbroit… and kichel, both of which are dried out in the oven; the secret to their tasty longevity.

Kichel lovers, we have to prove her wrong. 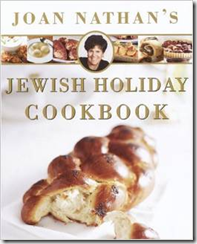 Let’s win this war for delicious kichel, starting with “my” exclusive recipe for kichel.  It’s actually Ben Moskovitz’s, via Joan Nathan, as shared in her Jewish Holiday Cookbook.

But before you begin, beware!

It is super-easy to make, but the real secret to this recipe is a strong mixer that you can leave running for the FULL five minutes.  A hand mixer just won’t work (I broke one trying).

I didn’t used to understand this, but came into a free Kenwood Chef here in Israel that has made all the difference.  Flour changes when you work it hard like this.  It brings out the gluten so you’ve got more of an unyeasted bread dough than a weak, wimpy cookie dough.

You’ll need some free time to make this recipe, but remember – you can always make it on Thursday for Shabbos.  It’s kichel; it’ll keep.

(Okay, I admit:  in the cookbook, they’re just called Kichel.  I added “Secret Weapon” to spice things up a little.)

As Joan Nathan says in the intro to this recipe, “Kichel, coming from the same root as kuchen in Yiddish, means “cookie” and is either sweet or savory.  This particular version, rolled in sugar before baking, is very light – it melts in your mouth.  ‘On Saturday night in Apsha, before the war, people had tea and kichel,’ said Ben Moskovitz while making this recipe.”

Let cool before eating… and enjoy!

Oh, and if you see Paula Shoyer, let her see how much you’re loving every bite.  Maybe even refuse to share it with her until she relents and admits that they are the most fluffy, delicious kichel she’s ever tasted.