Every once in a while, I have to ask someone to pass me something in the kitchen… and sometimes, I get stuck.  Consider, for example, the humble spatula. Oh… unless you mean

Or – did you mean 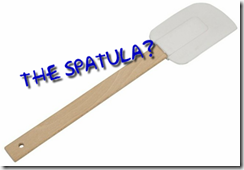 Yeah, it’s hard to tell.  What?  You call this last one a RUBBER spatula?  Well, good for you, but doesn’t that mean you think it’s a spatula?  “Rubber” is just an adjective, after all… it shouldn’t have the power to make you hand me the totally wrong implement.

A few years ago, I started noticing another entrant in the spatula competition.  Happily, the world seems to have acknowledged the confusion and informally dubbed it the SPOONULA.  You could also call it a SCOOPULA, because it’s scoopier than a regular spatula.  But in my head, I admit… it’s always going to be a SPLATULA.  (Why?  It holds more stuff… and stuff goes splat.) 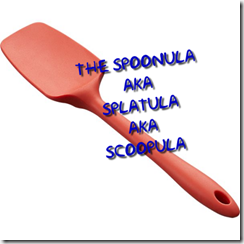 Some people call the first kind of spatula a TURNER, like as in a “pancake turner” or “fish turner”.  But to me, THIS is turning. 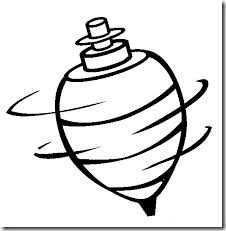 What you do with fish and pancakes isn’t turning, it’s flipping.  So you can call it a FLIPPER if you like, I suppose.  But I don’t, and neither does anybody else.  It’s a SPATULA (but so are the others).

I’ve noticed that in some circles, the third gadget from the top has come to be called a BOWL SCRAPER.  Especially the ones that are a little rounder and bowlier shaped. 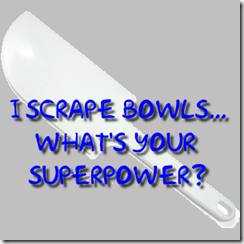 But once we’ve entered the category of things that are called SCRAPERS… well, here are my two favourite scrapers in the kitchen department. 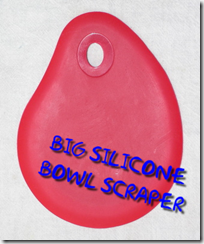 Silicone BOWL SCRAPER, bought from Breadtopia.  Also known as a dough scraper because, you know, nothing’s simple.  I like how it has a hole so if I were a professional, I could mount it on a lanyard and carry it around on my neck.  It’s made of silicone, but it’s full of steel in the middle; like a good pair of steel-toed boots, it can take a licking.

My other main scraper is this guy, sold as a PAN SCRAPER.  but why can’t you use it for bowls?  It’s stiffer than the silicone one, so you can also use it to cut stuff if you want. 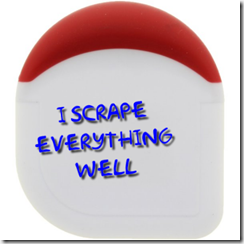 In the “scrapers I’ve always wanted” category (doesn’t everybody have one of these?) are these Matfer nylon scrapers, touted in this Bon Appetit article I read years ago as “the only kitchen tool you need.”  You have to dye them yourself to get this kind of colour, but I would… I really would. 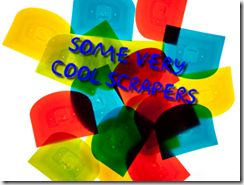 Here in the scraper category is also where I find my… BENCH SCRAPER. 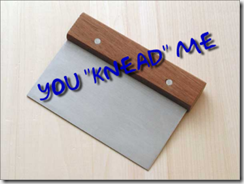 Also known as a “bench knife,” this guy is one of my Three Essential Tools if you’re working with wet dough of any kind.  I usually just call it a SCRAPER, causing no end of confusion.

“Pass the scraper,” I say, to anyone who will listen.  “Which one?” they ask, in perplexity.  “Oh, you know,” I’ll answer, although they probably don’t.  Perhaps this is why nobody helps out in the kitchen?

In fact, I forgot two newish entries in my current scraper collection… these stiff polycarbonate CAST-IRON PAN SCRAPERS I recently bought from Lodge. 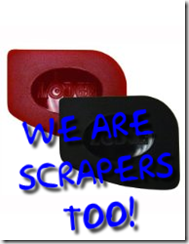 I adore cast-iron, which is as non-stick as anything Teflon, T-fal or Calphalon ever made, and far less toxic, but every once in a while, they need a bit of help to get back to squeaky-clean, and these scrapers are very, very useful.

Speaking of cast-iron, I have to admit that I absolutely can’t stand using plastic, silicone, or any other kind of implement in cast iron.

I will use them if I have to (I admit, nothing has a sharp, clean edge for getting under fried eggs like a plastic spatula), but by far, my favourite implements to use with cast iron are wooden spoons.  As Alton Brown says, basically the only thing that can go wrong with a wooden spoon is if you set fire to it. 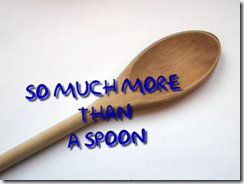 If you can get hold of a really BIG wooden spoon, it’s great for stirring all manner of things.  I used to have one but it seems to have gone missing years ago.  I had no problem coming up with a name for that gadget.  It was always, from Day One, known as… 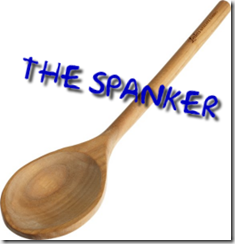 (I hasten to add here – this was absolutely NEVER used for spanking, or even just as a threat.  I would never condone such a thing… in case it’s not completely obvious.)

Beyond spoons, I also like other wooden shapes of things.  They feel warm and organic in your hand, and take on a nice dingy-grey patina with age.  I especially this one last tool that I admit I don’t have a name for.  Coming full circle, it’s shaped a bit like a spatula.  But it’s made of wood.  Plus, unlike most things that are called a spatula, it’s flat.  Which leaves me, woefully, in my head, never out loud, calling this last critter – one of my favourites… 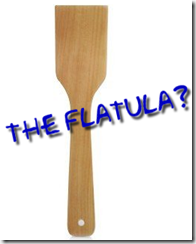 If you can think of a better name for any of these gadgets… please leave a comment and let me know!