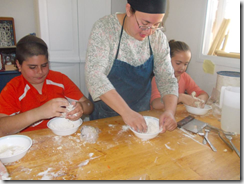 So the one thing that apparently never changes is – I forgot to take pictures of the finished matzah.  Some years, I do; others, I just get so distracted and carried away by that point in the festivities that… well, I don’t.

So when I invite “kids” over for matzah baking… yeah, there is the element of having fun and playing with dough.  But you can be sure it’s also my main “social thing” for the day / week and perhaps year.  Here, apparently nobody gets that.  Instead, we got two kids we kind of know, bigger boys than I’ve baked with before (but that’s okay; big boys are sometimes suckers for this kind of stuff!), and two random friends they brought along, off the street, perhaps. 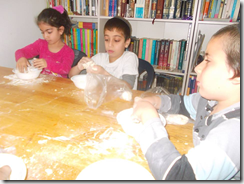 The catch is – the two random friends don’t really speak English.  The boy kind of knows some words.  The girl, not at all.

So I ended up doing the whole thing pretty much in Hebrew, with the help of the biggest boy in the red shirt at my right.  In general, it was okay, except for needing to be taught certain Crucial Vocabulary Words, like rolling pin, flat, and “stuck to the table,” several times over. 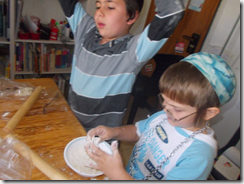 But I had a great concept for this year’s matzah bake, given that the kids were older than I’ve had before, and the homeschooler in me totally wants to share it.  Instead of just baking matzahs, I decided to do a Baking Science Experiment.  (“Hayom, anachnu madanim”… “Today, we are scientists.”  “How do you say experiment???”)

In order to do a Science Experiment, you need a Critical Question to investigate – in this case, “how are chametz and non-chametz doughs different?”

And you need at least two Experimental Things to test, preferably with only one small difference that allows you to investigate the Critical Question.  So I decided to let the kids work with OLD DOUGH and NEW DOUGH to see which was easier to work with.

I told them we were going to make a SLOW DOUGH and a FAST DOUGH.

Then, we jumped right in. 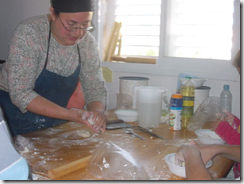 1.  The slow dough was first.  I gave each kid half a cup of flour in a bowl and added a bit of water.  They had as much time as they wanted to knead it into a nice dough (“batzek yafeh” – it took a few tries for me to stop saying “batzak” and “betzek”!).  Once they each had a dough, we stuck it in a baggie – SLOW DOUGH done and resting (ha batzak nach).

Happily, the “slow dough” gave us a good practice run at making the dough before it was time to make the “non-chametz” 18-minute matzah dough.  NOTE TO SELF:  No matter how they beg, do NOT allow children to wash their hands in between batches!!!

2.  Now it was time for the FAST DOUGH.  This was the one that would be timed, so we could try to finish in 18 minutes.  I doled out more half-cups of flour, we started the timer, and OFF.  Except for the youngest, everybody had a nice dough made pretty quickly.  This time, we rolled it out right away (yay for last year’s rolling pins!), poked it with a fork and popped it into the oven. 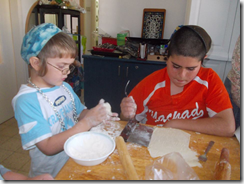 So the question on all of your minds, I’m sure, is… Did we finish in time?  Well, some things never change.  The matzahs were ALMOST ready by the time our 18 minutes was up.  At that point, I turned on the convection and they promptly crisped up, probably 2-3 minutes late.

No, we didn’t make it within 18 minutes.

But that wasn’t our goal – our goal here was Scientific Discovery.

So while the FAST DOUGH baked, it was time to pull out the SLOW DOUGH again for Step 3.

3.  Time to bring back the SLOW DOUGH out of the baggies (happily, we wrote names on each baggie).  I held up mine in triumph to show them the truth of chametz vs matzah:  it’s not about yeast (as everyone thinks), it’s not about baking soda (huh?), it’s not really about air and “puffing up” – it’s about fundamental chemical changes in wheat flour once it has rested in contact with water for more than 18 minutes.

The dough was perfect.  After it had rested for a while in the baggie, I let the kids touch it and pull it to see that it truly was stretchier than the FAST DOUGH that they’d just worked with.  Then, I gave them theirs to roll out, hole punch, and we baked those up as well.  There wasn’t much difference in the baked end results… but I hope the significant difference in workability in the SLOW DOUGH made an impact.

If you wanted to extend this scientific concept, by the way, for a complete lesson in chametz and matzah, you could try it with different grains.  Corn meal, for instance, probably won’t do much of anything even if you soak it.

You could also test if these changes apply to all the “five grains” (wheat, oats, barley, rye, spelt) that are considered true grains in Jewish tradition (I suspect they wouldn’t to oats and rye, since they have very little gluten; not sure about barley).

Or, you could do like I did and schmear your matzahs with butter and salt and chow down, thankful to be here in Israel even if I do miss my “regular crowd” terribly much, even if I am surrounded by kids who don’t understand me or my experiments (okay, that one isn’t really new!).

Thankful to be free at this Season of Freedom.

Whether you’re making it yourself or just chowing down on your matzah, have a happy and kosher Pesach… from the entire BreadLand crew!!!