These are actually based on this yummy mall-pretzel copycat recipe, which I’ve made a lot, but I made a couple of changes to turn them into bagels.  First, I doubled it… that’s not really a change.  I mixed it in the food processor, which was great.  I also subbed malt syrup for the brown sugar to make it more bagel-y, and added a tsp of salt per recipe, because there’s none in the original.

They had a nice long rise because I started them in the early afternoon before we went out to a 2-hour kids’ class.  I made the holes a bit differently from usual – started with 100g boules and, with a well-greased finger, poked a hole into them which I expanded over several iterations until there was more hole than bagel (I can’t stand cake-y bagels with skimpy holes!). Added the last of the malt syrup (boo hoo) to the boiling water, along with a bit (2-4 tbsp?) of baking soda.  This is a terrible pot for boiling in, because it can only take 3-4 bagels at a time. (One – not shown here – got squashed as it went in, which immediately and permanently twisted it into a figure 8.).  Boiled about 1.5 minutes… 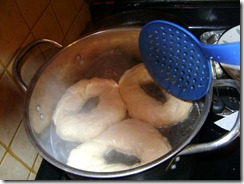 Now out on the pan for poppy seeds!  I could only fit 6 on a pan because they were quite large and puffed up a bit more from the boiling step: 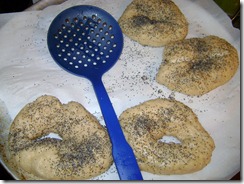 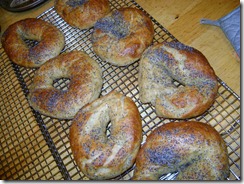 They were a bit weirdly “moist” around the bottom, which I’ve never experienced before, but all in all, fresh, delicious, and not too involved.  I would like to investigate how the boiling time affects the final texture, though I’m not sure exactly what texture I’d be hoping for, ultimately.  I’ll know it when I taste it.  I do know these were a darn sight better than most of the “bagels” available here in Toronto (which are actually just bread-in-a-circle – blah).

Served with a simple bean soup that everybody raved over… ah, the simple things.

Do you have a go-to bagel recipe???  Or a bread that involves several steps… that are SO worth the extra work?