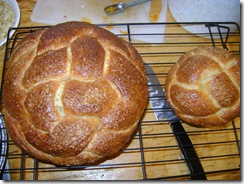 Disappointing because it was a LOT of work and tasted, well, not extraordinary.  Blah.

I was inspired by this beautiful post about an apples-and-honey challah – sounds amazing, right?  Stuffed with apples, it truly is gorgeous – click over and check it out (the one above, left, is mine).  But she doesn’t show 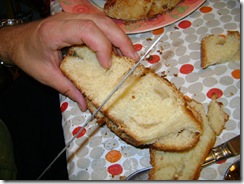 you a picture of the inside, so I’ll cut right to the chase and show you that what looks like a TON of apples, going in, totalled to a few straggly bits that didn’t make a noticeable difference to the bread itself.

To be totally, TOTALLY fair, I didn’t follow her recipe.  I used Maggie  Glezer’s Czernowitzer Challah, because I’ve used it for stuffed onion/poppy challahs every Purim and it always works out okay.  I think it’s not as sweet a dough, but the texture was also eminently ordinary.

Lots of work, though…

Chop up apples – the original uses bigger pieces, and perhaps they’d be less juicy if you didn’t cut them so much… and they might not “vanish” into the bread in the same way. 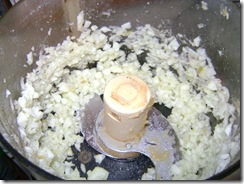 Roll out the snakes, but flatten them to add the apple. 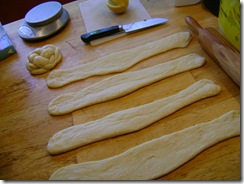 Ignore the odd “bone” shape of the dough here.  I felt the ends were getting too skinny, so I folded them back and it worked out okay. 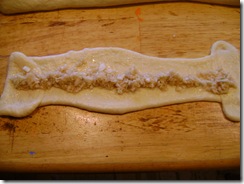 By the time I had done four of these, you can’t tell from the pictures, but I had a sopping mess on the table and was practically screaming with frustration.  I absolutely could NOT keep any of the snakes closed for more than a few seconds.  The dough was too wet and sloppy and… well, argh.  I have no idea how it looks so good in the pictures. 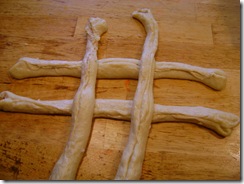 This finished woven bread does NOT look good, but the magic happens when you flip it over… 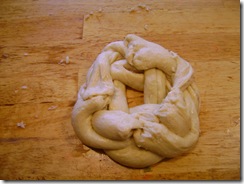 And behold – an actual, slippery, newborn challah.  You can’t tell from this picture, but 20+ challahs later, I’ve become very, VERY good at this woven challah that was new to me only a couple of weeks ago. 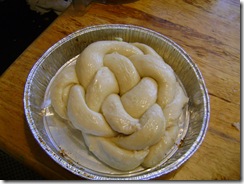 The challah dried out nicely while it was rising and despite my fears that the breads would slip open and slop their contents all over the pan while it baked, turning it effectively into sticky buns, the snakes actually stayed shut and miraculously, the bottom of the challah was solid and dry by the time it came out of the oven, revealing no hint of the tiny-bits-o-appley-goodness that lay within.  Very, VERY tiny bits.

A few tips from experience if you DO want to make an apple-filled challah: