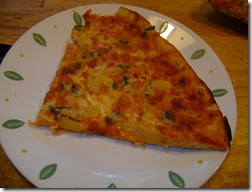 I know pizza sounds like a terrible choice for a hot summer day, but somehow, I find short bursts of oven use, however hot, more tolerable than long hours of baking.

So – pizza takes a 500 degree oven, but only for about 12 minutes and then it’s DONE and you can switch it off.  And in terms of prep time, it’s perfect hot summer food because it’s very, very easy. 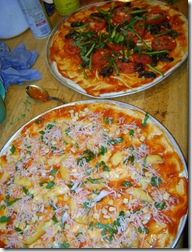 Now, I do wonder why it is that when I am absolutely SLAVING over pizza, like last time, when I actually had to deliver it to another family, it turned out absolutely awful… and then, when it’s just you and there’s nobody to impress, it turns into the best pizza you’ve ever had???

Well, I will say this – I love tasty bread and all, but this pizza used a quick-rise dough and I don’t feel at all guilty or ashamed because under tasty toppings, it’s REALLY hard to tell.  In future, for pizza, I’ll probably go for easy kneaded dough over fiddly no-knead dough.

Anyway, Ted and I each did one.  His had tomatoes, fresh garden green peppers and fried mushrooms.   He tried to make half “cheese-only,” but I wouldn’t let him.

His philosophy involves protecting the children from interesting and/or tasty food experiences – mine involves plunging them in headlong.  I am truly my father’s child; this is the culinary equivalent of tossing his children off the diving tower at Sandbanks Provincial Park (which, thankfully, he never did to me so I never had to develop a lifelong fear of water).

My pizza had – okay, just listen respectfully as I describe my inspiration: 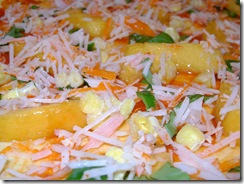 YES, it sounds awful, and I’d never order it in a restaurant, but it felt like some ghostly chef was calling to me and begging me to add those toppings. 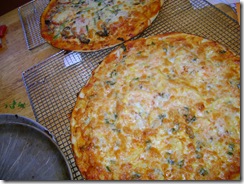 Ted’s pizza (in the background) was a little soggy on the bottom.  I blame those storebought tomatoes, which make up in water what they lack in flavour.  A lot of people don’t realize that loading up a pizza with toppings can water it down and make it soggy no matter how hot you cook it.

Speaking of which, the tomatoes didn’t fully cook, either, making the pizza hard to slice.

Mine, on the other hand, was crispy-toasted perfection, top and bottom. 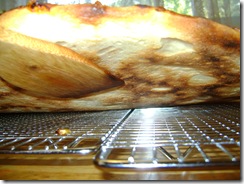 I wish so many of my posts didn’t have to end with a simple “mmmm…” but just like news anchors have their famous “taglines,” like Walter Cronkite’s “That’s the way it is,” maybe my tagline will be, “mmmmmm….”

I’ll be famous!  Life will be good… unless, as I’m tempted to say, it doesn’t get better than this.