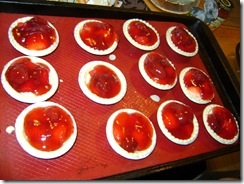 It’s strawberry season!  The time of year all us snob-berries look forward to more than anything else! (okay, tomato season is good, too)

So why not celebrate by buying tinned strawberry PIE FILLING?  Um, no.  But indeed, Ted wanted strawberry tarts and seemed rather pleased that he had the filling to make them and everything.

He also bought a package of 12 pareve tart shells – the usual store-bought ones are dairy, so that was a nice find.

With very little time on a busy erev-Shabbos afternoon, I came up with these coconut-custard semi-fresh kinda-real strawberry tarts.

I made a coconut custard based on Shoshana’s recipe here at Couldn’t be Parve, but instead of soy milk (which I didn’t have and don’t like anyway), I just used 1 tin of coconut milk.  I kept back some of the watery part of the coconut milk and mixed it with 1-2 tbsp cornstarch for a thicker finished pudding.

Basically, I heated the coconut  milk slightly (right on the burner; mistake #1), and added half of Shoshana’s custard recipe:

Then I mixed in the cornstarch-coconut water mixture and whisked the whole thing until bubbles appeared on the surface.  Kept stirring, like you do with pudding, for 1 minute more.  At which point, the whole thing broke and curdled and I almost wept.

It did thicken up a lot, so I turned off the heat and let it rest for a bit, then threw it in the food processor to try to whiz it back into a semblance of custard.  Miraculously, it worked! 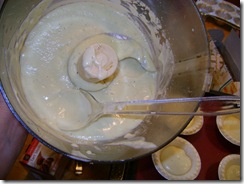 It was a tasty, very presentable pareve coconut custard (ignore the tiny black specks – I only have one pareve pot, which is the dutch oven I use for both bread-baking and candy-making, so it is somewhat speckled with burnt stuff inside).

I spooned this mixture (messily) into the tart shells: 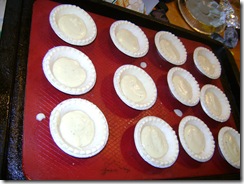 Then topped each tart shell with several halves and quarters of REAL fresh Ontario strawberries, which we had in the fridge, but which Ted hadn’t thought of including in the strawberry tarts. I didn’t bake them long enough, so the tarts themselves were not quite crispy enough.   If I was doing this again, I’d probably parbake them empty, because the actual filling doesn’t need much cooking time at all.

How do you celebrate fresh strawberry season???