What with the kids making challahs yesterday, I realized I had too many if I made all my “snakes” into 4-braid challahs.  So I decided, with the snakes I’d already rolled out, to make 2 6-braid loaves instead of 3 4-braid loaves. 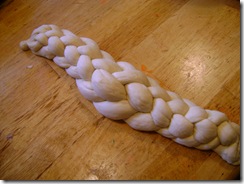 Rolled out the snakes nicely: long and thin, because if they’re too fat, a 6-braid can easily turn into a round challah.  Braided them up… and then noticed an extra snake sitting on the table: I’d forgotten to include it, and one of my beautiful “6-braids” was actually only 5.  Can you guess which one??? 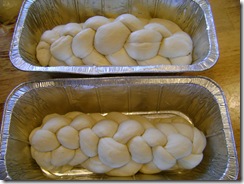 Quick fix – and seriously, this was the easiest solution to any bread problem I have ever encountered:  tuck the extra snake underneath the braided challah in the pan.  Can you see it hiding under there??? 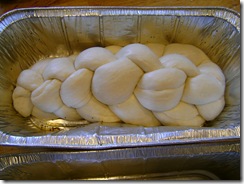 Left it to rise, baked as usual… and nobody ever noticed the difference.  The volume of the finished challahs is identical, because they both contain 6 strands – just one has the extra strand hidden inside… (yes, I managed to take pictures of MY challah when it was baked, but not Gavriel Zev’s landmark First Challah Ever – I know; I’m a terrible parent…)

I realized as I was talking to a friend last week that I never explained here why I do four as my standard Shabbos challah when most people do a 3-braid.

It’s a stupid reason:  I read on some kind of Hebrew-Christian (“messianic Jewish”) blog or site or maybe even a book that three is a great number for challah because it represents the three parts of the trinity: father, son,  Holy Ghost.  At that moment, I thought, “okay, no more 3-braids for me!”

I do still sometimes make a 3-braid, but I also like the lovely 3-dimensional look of a 4-braid, which can be done using the exact same technique as Maggie Glezer’s 6-braid.

I’ve posted this before, but I thought it might be helpful to once again share this video of Maggie Glezer doing a 6-braid in case you’d like to try it at home.

(I think it’s very charitable of her to say in this video that the “technique” of stacking two 3-braid challahs is “an okay look,” because I actually think it’s a bit of “a goofy look.”  But then, you’ve always known I was a snob, right???)

And now you know - if you forget one of the snakes, don’t worry – just tuck it in underneath!