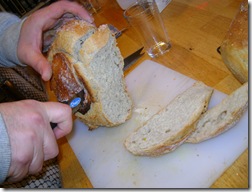 Always a milestone after Pesach!

This was just my basic no-knead “Ryelicious” Loaf.  It was super-easy, but left me thinking, “hmm… not enough rye!”  Maybe it’s because my rye flour is a little old, but it just left the impression of a slightly-more-flavourful white bread.  Delicious nevertheless!

I kashered my new cast-iron loaf pans in the self-cleaning oven cycle so I could use them for Pesach, and I have spent the last two weeks worrying about how long it will take to get them back in working order again.

They worked SO perfectly from the get-go: loaves released like a charm – amazing.  Just tip them upside-down and they pop right out.  I have used cheap loaf pans for so long, I was amazed that I didn’t have to use parchment and STILL didn’t have to dig the bread out when it was finished.  Even my sister seemed a bit jealous – in a commercial setting, it simply isn’t viable to be tossing around pans that weigh this much even when they’re empty – not to mention costing quite a bit more than cheap commercial bake pans.

Anyway, my heart broke when I saw the pans (along with two cast-iron frying pans) after the self-clean – bare, almost rusty-looking… iron.   I thought they would never release cleanly again.  I mean, Lodge touts that pre-seasoning pretty heavily on the packaging, and now it was all GONE.

So it was with trepidation that I lightly greased (with canola) one of the pans and tossed in one of the 1.5-lb rye loaves to rise for an hour.  Then I baked it, about 40 minutes at 450… opened the oven, tipped the loaf pan over the rack (thanks to my amazing Kevlar oven-gloves!) and – WAH-la!!!  It released!

So I am much relieved and excited to have my pans back – for Pesach and year-round.

Next up – first challah!