Speaking of Chometz: I figured it out!

Last year, Ted gave me a gift, a special pillow for stretching out naan and other flatbreads.  I posted about it at the time, wondering if anybody knew what it was called.

And tonight, I found out at last!

In India, it’s called a GADHI, but it’s also known as a “tanoor  pillow,” “sticking pillow” or, so obviously I don’t know why I never googled it before, “naan pillow.”

Here is a rather large one changing hands somewhere in the middle east – Lebanon? 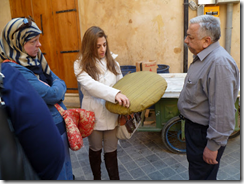 You can watch a small one in action here:

And then, for a sophisticated, modern, burn-proof take, there’s the “Naandle” – a portmanteau word of “naan” and “handle”.  Cool!

I am guessing that the diameter of the pillow is correlated to the size of the bread and/or the oven opening.  A large oven opening can make larger flatbreads and take a larger pillow.  The oven in the video above is fairly small.

Also, like a couche or any other fabric used to handle bread, I suspect that they are ideally made from a tightly-woven cotton fabric so as to ensure that the dough doesn’t stick to the pillow.  Of course, with frequent use, the thing would get so floury that nothing would stick to it, ever.

I  have also completely MORE than satisfied my hunch that the Indian word “tandoor” and the Hebrew / Middle-Eastern word “tanoor” are pretty much one and the same thing.

And now all I need is to have one of my very own!

Why am I doing all this thinking about tanoors and giant, savoury flatbreads?  Because of Ted’s parsha cartoon this week!