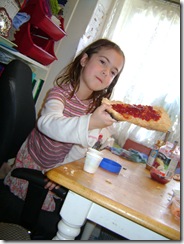 One of the mamas at our homeschool matzah bake today pointed out how many calories are in matzah compared to bread – I forget, but it’s something like 4 times as many – because matzah doesn’t have all the air and water that bread does so it’s just pure calories.

Which got me thinking – it’s  astonishing how much flour today’s baking wasted… or, if you don’t want to think of it as waste, because everybody was learning and having fun, at least how INEFFICIENT matzah baking is.

Each kid started with a cup of flour and 1/3 cup of water.  There were six kids, plus I had two cups of flour, which makes 8 cups of flour altogether.

If I’d made BREAD with 8 cups of flour (about 1080g), it would be enough for at least two big loaves.  In fact, I made two 680g loaves yesterday with 877g of flour, and I had dough to spare at the end of the evening.  Just one of those loaves would have fed everybody here for lunch quite handily.

As it was, out of those eight cups, we had barely enough matzah for lunch – each kid made two big matzahs, and they didn’t eat it all, but because the mamas were also eating lunch, all the matzah was gone by the time the shmearing was done.  Eight cups worth of dough (granted, one matzah burnt beyond recognition – yet another inefficiency!).

It didn’t help that (once again, according to last year’s post), the dough was too wet.  That meant I couldn’t roll it out super-thin, which not only makes “more” matzah – ie more surface area – but also creates more PALATABLE matzah, since thinner = crispier and easier to eat.

Anyway, just thinking about this made me realize that although matzah prices seem exorbitant, these inefficiencies of matzah baking probably extend somewhat to the larger-scale operations that make it professionally.

In other news, I had a brilliant idea for a “chometz museum,” which I set up to showcase the five different grains (wheat, oats, barley, rye, spelt) with which matzah can be made, in their various forms (well… I ran out of spelt, and I wasn’t going to buy more two weeks before Pesach just for this occasion).  I also had separate dishes for kitniyos “grains” – rice, corn and beans – so the kids could pass them around and touch and feel them. 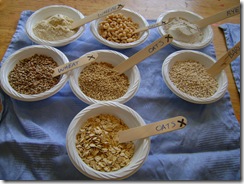