Hi!  This is an old post, but I’m still making kichel.  In fact, it’s one of the few baked desserts that have seamlessly managed the transition to life in Israel.  Here’s a newer update on The Secret to Kichelicious Kichel.

Drat.  As with almost every other erev-Shabbos baked delicacy I try out, I didn’t get a chance to take a picture when they came out of the oven; by now, of course, 26 hours later, they are ALL GONE.

them “nothings,” perhaps to differentiate them from the type of pasta (which I’ve also made) which is also called bowties.  The ones generally called “nothings” are sometimes baked in a square shape with no sugar on top, but there are exceptions.

They were super-easy, too, thanks to Joan Nathan’s recipe from A Treasury of Jewish Holiday Baking (I found the recipe, improbably, at the Calgary Public Library blog (I thought we were the only Jews in Calgary when I lived there!), but it doesn’t tell you what to do with the flour; for that, I had to use Google Books (search for Kichel or just look at Page 100).

Rolling out the super-sticky dough; you do it onto the sugar, so nothing sticks. 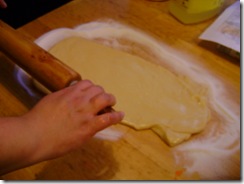 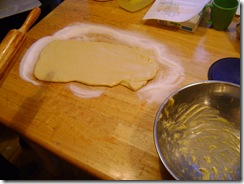 You can see how soft & sticky this dough is from my finger-tracks in the residue left in the bowl (above).

Finally, sprinkle the dough with sugar (you’re supposed to roll it in a little bit with the rolling pin), and slice into little rectangles. I think they’re supposed to be 2” x 3/4”, but I just eyeballed them into what size I thought they were supposed to be, and after a lifetime of kichel-eating, I was right. 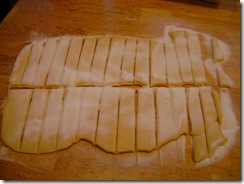 The last step was twisting and loading them onto two baking pans, but I was in a hurry and stuffed them all onto a single pan, which they barely fit.  Next time, I’d use two, because they kind of stuck together and weren’t able to dry out completely (I did flip them halway through baking, which helped).

My mother was the one who got me started on the kichel-baking kick this week, nostalgically trying to recreate my Bubby’s “eier-kichel” recipe (in German/Yiddish, “eier” means egg).  She used the recipe with that name from Encyclopedia of Jewish Food, a new book I’ve heard nothing about.  But the author, Gil Marks, refers to them as “Ashkenazic Egg Cookies,” which sounds like nothing joyous to write home about, and indeed, my mother’s turned out exactly like cookies – they had the right flavour, but none of the POOF of a proper kichel.

My Bubby made hers big and round like a giant cookie, or like a UFO, and when she baked them, they would puff up incredibly, magically… sugar-blackened (often slightly scorchy-tasting) little bellies popping off the pan with a secret cave of airy egginess in the middle.  It wasn’t light or heavenly; none of her baking was that.  But they had a satisfying familiarity that I would love to recreate.

Oooh, I just discovered ONE last kichel that nobody ate.  This isn’t the most spectacular specimen, but it will give you some idea!  The rest really did look like something you could pick up at a bakery. 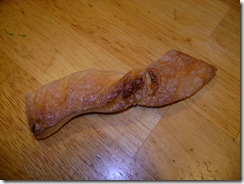 From searching on Google, it seems like a lot of people associate kichel with Pesach.  Believe me, that’s a horse of a totally ‘nuther colour.  We don’t eat gebrocks at Pesach and don’t like matzah meal fakery at any other time of the year, so no… that’s not what I’m looking for at all.

What I’d do differently next time:  bake them at leisure, let the dough sit the whole hour (I only gave it half an hour because Shabbos was coming!), use two separate pans so they have a bit of room to spread out and dry out more.  Also, I want to try baking them in my Bubby’s circular “UFO” shape.

But I’m super-impressed, because, for some reason, this is something I had never even thought you COULD bake at home.

Next up:  Cheesemaking!!!  If the kit I ordered arrives this week (note that the rennet in that kit is kosher but I don’t know about the starters, so I ordered kosher “mesophilic starter” from the site as well; I just don’t want everybody clicking over and assuming EVERYTHING there is kosher).

Anyway, I won’t blog that here; cheese, containing no flour at all, seems to fit better on my regular blog.  But if I find a way to combine homemade cheese with flour… boy, then I’ll have something to blog about here.