Actually, this is more than a New Baking Toy – it’s Step 1 in a however-many step plan to bake the perfect Malt Bread, exactly as I remember it from childhood, or as near as makes no nevermind. 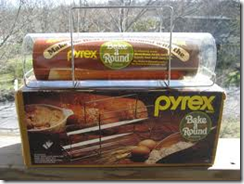 Bought new in box on etsy for not too much money, and shipped BEAUTIFULLY packed – I’m very impressed.

The actual malt bread I’m thinking of is NOT the “malt loaf” popularly known by the name Soreen in the U.K.  That looks icky; it’s full of fruits and whatnot.  What I’m searching for is authentic Canadian malt bread, such as that turned out every day in the Dempster’s factory and sold without a hechsher in supermarkets very near my home.

The bread itself is sweet, but not too sweet.  It has a definite malt taste, and – I’m thinking now – perhaps some molasses as well.  It has a dark colour, but that could easily just be caramel colour… which I don’t have.  Definitely no fruit, no puréed dates or raisins or whatever else British people think belongs in a malt loaf.

As for the Bake A Round, this cool pyrex pan creates perfectly round breads, apparently with a lovely, crisp, artisan-style (shudder) crust. 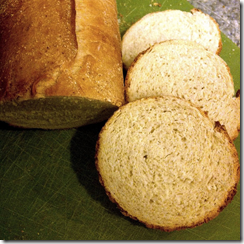 It’s a fascinating shape, although the true malt bread is more like this round, bumpy shape:

In the U.K., where – again – everybody knows about such things, this is known as “milk loaf.”  And it is baked into those beautiful swirly round lines in a “milk loaf tin.”  Here’s one I found on eBay – at $40, actually not all that expensive. 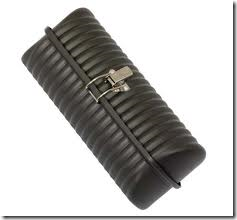 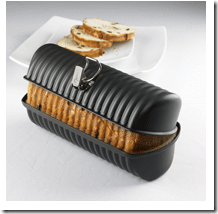 But for now, I’m happy with my Bake A Round.  Ted’s off work tomorrow, so I hope I can go toivel it and get started baking delightful, crispy, eventually malty loaves.