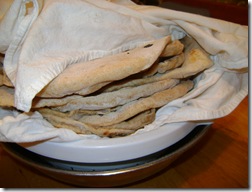 Not pita exactly, since this is basically the same way I make any flatbread.  Roll it, pat it, and toast it in my wonderful cast-iron skillet.   Dry – no grease or anything on the pan beyond the olive oil we apply to store the pan.

I used the basic “50% spelt” recipe from Artisan Pizza & Flatbreads in Five Minutes a Day.  Not sure I love the cookbook, since there seem to be many many sauces and dips and not so many actual bread formulas, but I have it out from the library for a while longer, so I will keep exploring.

The reason I wanted spelt – other than the fact that my mother and sister picked me up a big bag of nice, fresh spelt a couple of weeks ago – is that I was preparing these “pita” for an “Egyptian feast” to tie in with our ancient history studies.

Spelt may not be Emmer and Einkorn, but it’s a bit more authentic, and it adds whole grain without weighing down the taste and texture of the bread.  As far as I’m concerned, the words “delicious” and “whole grain” don’t usually belong in the same sentence… but spelt is where I (sometimes) make an exception.

If there’s one thing my current challah technique has gotten me REALLY good at, it’s rolling out millions of little circles. 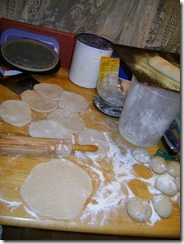 Here, I stretched one out on my special suede flatbread pillow (anyone know what this thing is called???): 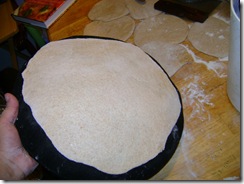 Only to realize that the skillet was smaller than the pillow diameter.  Doh! 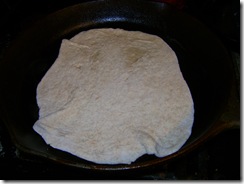 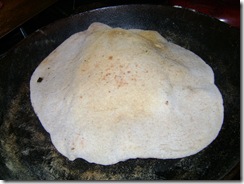 Ted suggested, because we always run out, that I should make 16, instead of 12 like I usually do.  Here they are! 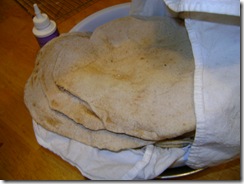 (For the first time ever, we had leftovers…) 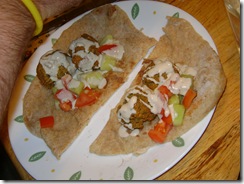 Mmmm…. the falafel themselves were from a mix, by the way.  Delicious, easy; I have made them from scratch, but the mix is just as good, and foolproof. For more about the feast, including the special “ancient” Egyptian dessert that Naomi helped me make,  click here.