Nothing goes together at Sukkos time like fresh-picked PUMPKIN and challah dough!

We didn’t actually pick the pumpkins ourselves, but did pick them UP (and pick them OUT) at the place we went for apple picking.  So it’s sort of the same thing…

I have vowed never to peel another raw squash again, because it’s so blissfully EASY to just cut them in half, pop them in an oiled pan face-down, and roast them at 300° until it’s soft enough to poke.  You can actually roast them at almost any temperature.  400° works just as well but quicker… but just look what this Australian baking blog says about LOWER temperatures:

We roast the pumpkin in our wood-fired oven at a low heat (50C to 100C) for 24 - 36 hours. At the low temperatures the pumpkin malts, which firms and helps keep the pumpkin from falling apart in the dough.

Yummy!  (one of the kids said they thought the pumpkin would MUMMIFY in the heat, which it sort of sounds like it does… “malting” being another word for the mummification process)

Anyway, with my sourdough being up and about for the first time since January (gasp!), I decided to risk everything and toss that amazing fresh-roasted pumpkin into a sourdough challah.  I used Maggie Glezer’s Pan de Calabazas recipe from A Blessing of Bread, but I substituted 180g of my firm starter for all the yeast and some of the flour and water – using my sourdough spreadsheet to do all those tricky calculations, of course!

Here we go, step by step…

The night before, mixing it all together.  Forgot to slurry it like she does in the recipe, but it all seemed to come together okay anyway, once I had compensated for a criminally evil version of the recipe that I found online (the book went  missing) which listed the wrong quantity of flour… and I was so tired that I didn’t realize and thought 7 oz might just equal 3.5 cups.  (nope!)

Anyway, it worked out fine once we found the recipe (thanks Amazon Look Inside - p. 178 in case you’re peeking!) and got the right quantity of flour from there… at which point, Ted came upstairs with the actual book, which he’d found stuffed backwards onto a basement bookshelf.

So here’s the dough: 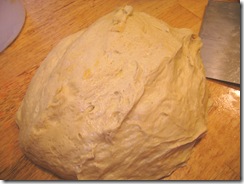 (whoops – forgot the egg… but it only calls for one, and I don’t like eggy challah, so I wasn’t all that worried)

Fast-forward to mid-day the next day (erev Yom Tov), when I rolled it out.  I wanted to make the sourdough Calabaza loaves look special both so I could tell them apart and because – hey, they really ARE special. 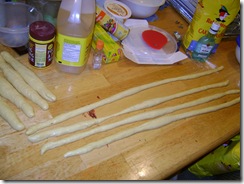 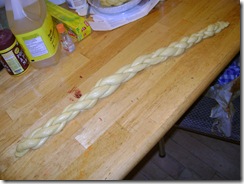 And coil up the braids to make a round challah! 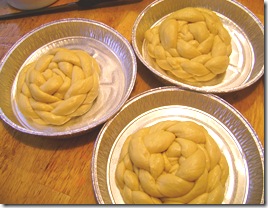 I also made three “plain” pumpkin challahs.  I used the rest of the fresh-roasted pumpkin, but stuck it into my regular Reliable Challah recipe.  Sadly, I also cut back on the sugar in that recipe, thinking the pumpkin would make it sweet – it kind of didn’t.

I made the “plain” loaves into regular snail challahs: 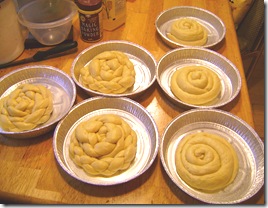 All the challahs were smaller than I like to make them, which is a nice even 675g (1.5lb).  I knew I needed six loaves for all the meals that were coming, and couldn’t whip up another batch of challah at the last minutes.

I seem to recall that the braided round sourdough loaves were around 610g, and the regular ones were even smaller – maybe 575g?  TOO small –almost everybody passing through over yom tov commented that they would have liked more challah.  Blah… I hate when that happens.

I baked the regular, yeast-risen challahs first and then, perhaps an hour later, baked the sourdough.  They really rose very quickly and had just exactly the right amount of puffiness.

The flavour was nice:   not noticeably sourdough, but I was NOT disappointed.  We stuck the ones for Shabbos into the freezer, so I couldn’t check the keeping power of the sourdough vs the regular over their 3-day lifetime.  Every scrap of challah was gone by the time we made havdalah.

Oh - for once in my life, I actually managed to take a picture of the finished challahs before yom tov started!  You can see that I painted the sourdough challahs with extra egg – they were super-glossy.  Elisheva and Naomi begged me not to streusel the challahs – Naomi because she doesn’t like streusel and Elisheva, apparently, because it obscures the beauty of the challah… or maybe she just doesn’t like it.  I was in a hurry, so for once, I listened to them. 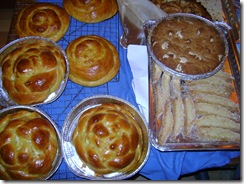 On the right in the picture, you can see two more of the yom tov desserts – S’mores Cookie Bars and Almond Biscotti (aka Mandelbroit).

Mmm again… this was GOOD eatin’!