Apple Galette for the Last Days of Sukkos

I love the IDEA of galette, though I still couldn’t overcome my distrust of fruit desserts enough to actually TASTE this one.  But still, I made it and it turned out great – if I say so myself – with delicious Spy apples that Ted picked himself and set aside specifically for this purpose.

I like galette because it’s freeform and forgiving; I have never attempted the fancy two-crust pies my mother makes, or even Ted’s, which apparently taste fantastic but are slightly more homemade-looking.  It’s not that I couldn’t do it – I believe I could.  I just lack the patience.

No recipe for this one – a basic Crisco (gasp!) single pie crust, with some leftover graham crackers sprinkled on it.  I peeled and sliced WAY too many apples, and tossed them with a bit of sugar (a compromise; Ted likes almost none and most of us here like a ton) and lots of cinnamon and left them to sit in a bowl while the crust dough chilled.  Rolled it out, added the apples, sprinkled with more graham crackers, then folded the crust dough over and…. 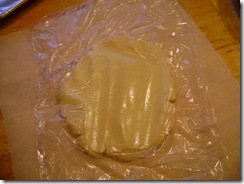 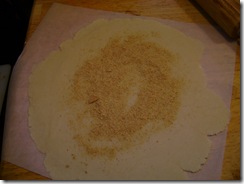 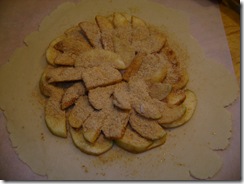 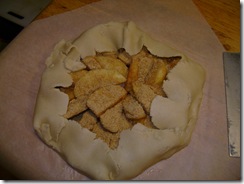 NO, it did NOT burn!!!  The camera did that, I swear.  Okay, some of the sugar on top sprinkled all around and got – um – overly brown.  But I promise, it was not burnt looking in person! 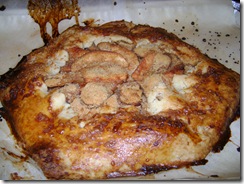 Interviewing Ted, who was looking over my shoulder as I typed this:  “how was the galette?”

Ted:  “It was very yum, for sure, very yummy… crust was slightly dry.  It wasn’t very moist.  I would have made it thicker so it wouldn’t cook so much and dry out.”

So there you have it!  “Not cook so much” should not be taken to imply that it was BURNT.  Really!  I’m just sitting here puzzling over how to reconcile the idea of a pie crust with the idea of MOISTness… maybe that’s why I don’t eat pie.  Too many contradictions!