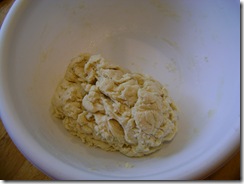 I came across a recipe for Blender Challah yesterday and the name just DREW me in.   A blender!  For challah!  It just sounded so cool!

It’s not quite as exciting as it sounds.  You use the blender for maybe 20 seconds at the beginning.  Basically, you make a slurry with all the ingredients, plus 1/3 of the flour, in a blender (I used my Cuisinart food processor) then stir the slurry into a bowl of dry flour.

This is almost what I do with no-knead doughs, except I use my Danish Dough Whisk, so the slurry doesn’t get as well-mixed, I suppose.  And I don’t pre-mix some of the flour – just dump it in all at once.

So I guess this recipe gives you a well-mixed base, probably better mixed than the no-knead, and ultimately a not-overmixed, probably cakey-type dough.

It appealed to me in part because we’re having a Rock-Bottom Shabbos where there is no grocery money so I have to make a smaller batch than usual.  Blender Challah calls for only 3 cups of flour – about half the size of some of my recipes.  But I was totally hoping you could do the whole thing in a blender.

It looks tiny in the bowl (picture above) and very lumpy and weird, but smoothed out and grew prodigiously and actually made two very decent-sized loaves.  After 1.5 hours, the dough was silky-smooth and, with a bit of oil, fairly easy to handle.  I left it on the table rolled out for a few minutes when I was called away at one point, and it loosened up considerably – it was quite saggy by the time I got back. 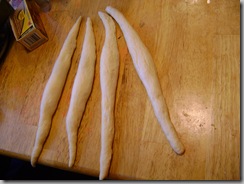 Then I got involved in a bunch of other stuff and almost let it overrise… but as it was, I think it was just about perfect. 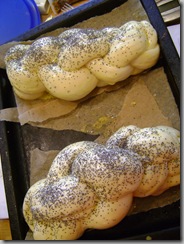 Elisheva requested extra egginess on top, so I egged it very heavily and then used poppy seeds because they’re my favourite. 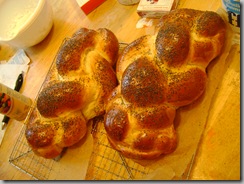 I will report back after Shabbos on how these tasted!