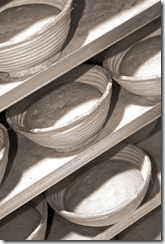 As my sister the baker has pointed out often, she sometimes (probably not often) envies the flexiblity I have in deciding what to bake.  Too often, however, that “flexibility” translates to inconsistent, mediocre bread simply because, like anything, you need to rehearse a bread many, many times before you can make it reliably well.

And the other day, she pointed out that the upside of her inflexible routine – baking the same breads over and over every single night – is that she has absolutely no experience refreshing and rejuvenating an old starter from the back of the fridge, which is where mine lives most of the time.

If she wants a starter, she’s got one – heck, she’s got several.  Rye?  Probably a bucket of it somewhere in the back.  Spelt?  Whole wheat?  Maybe.  Definitely, there are active cultures just waiting around in buckets for someone to reach in and grab out a scoop.

Whereas if I want to bake sourdough, it can’t be a spur-of-the-moment thing.  I have to plan ahead by at least one day, and preferably two, just to buff up the starter enough that it will do its job.

She did mention that she was saddened by the fact that these days, the bakery where she spends most of her time isn’t baking any 100% sourdough breads – there’s commercial yeast in every single formula.

Of course, she mentioned all of this because there is an uber-chef/foodie lady in our shul and Sara happened to be at her house last Friday morning, just in time to admire the – yes, you saw it coming! – freshly-baked challahs sitting out which were, natch, 100% sourdough.

Sigh… another challenge to keep me on my toes.  But NOT THIS WEEK!  This week it is SOoooo cold.  The temperature inside the house dropped to 16 (Celsius!) and my fingers were going numb.  There is no way I’m trying sourdough challah with temperatures like these.  But sourdough bread…?  Maybe tomorrow.