Didja ever see one of… 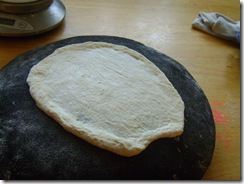 It’s a flatbread-stretching cushion!  I have no idea what it’s called, though I saw a reference to something similar on the caption of a photo of a person making Druze flatbreads. 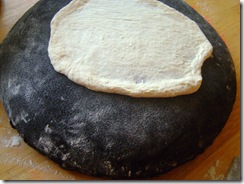 Ted bought it from Pita Pita, the Israeli hole-in-the-wall where he buys laffa and other Israeli-ish delicacies.

My only concern about this cushion is that it’s suede, and if I don’t flour the surface enough, and the dough is a bit sticky, black flecks of dyed suede slough off onto the flatbread.

I kind of sniffed when Ted gave it to me because I wasn’t sure how useful it would be.  But with the right traction, it actually is a great thing for spreading dough rounds out gently.

I used it last week to make naan and was experimenting with the professional technique of using the cushion to “slap” the dough onto a hot cast-iron frying pan.

The authentic thing to slap the dough onto is the rounded inside wall of a scorching-hot oven, or the inverted-wok arrangement that traditional Middle-Eastern flatbreads are made on (set over a fire).

I suspect those would have been easier to “slap” onto , because inverting it all the way over the frying pan mostly caused the dough to fold over and “slouch” into a blob that I had to quickly unfold before it baked that way.

Still – it’s a weird tool that NOBODY else has… so naturally, I’m determined to use it often!