This was yesterday’s bread component of a bread-and-soup meal.  In the morning, I mixed up the oatmeal-honey bread from 200 Fast and Easy Artisan Breads: No-Knead, One Bowl

, to bake in the afternoon.

I wanted to do something a little MORE with it than just a straight loaf, so I decided to do a filled, swirled raisin loaf.

Oh – I was proud of myself; I didn’t have brown sugar for the swirl, so I took white sugar and used the mixer to beat in a couple of blobs of molasses… the result was identical.  While I was mixing, I beat in a bit of butter and cinnamon as well.  Spread it on the loaf, sprinkled with raisins, rolled up, allowed it to rise, then baked it.

As you can see, I knew there was a problem as soon as I took the loaf out of the oven.  The seam of the swirl hadn’t been on the bottom, or shifted during rising, and suddenly, I had buttery raisin glop goobering out of the bread and even a bit over the side of the pan. 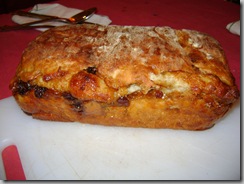 Definitely asymmetrical – not the most beautiful swirl loaf ever, but this was my first attempt.  Oops! 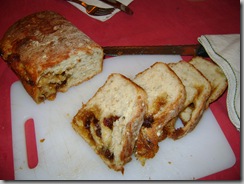 It was very, VERY yummy however.  Hit all the “cinnamon bun” buttons with a fraction of the calories.  The oats were not noticeable in the final bread, but gave it a softness and sweetness that definitely sang out “cake.”

And it was all only slightly surreal served alongside the “main attraction,” which was broccoli soup!!!  The kids couldn’t believe I was giving them dessert for supper… still; they can’t all be dense, underbaked super-sprouty experimental spelty wheat loaves.