Once again, I am happy and amazed that bread – even the BEST breads – can be made not only pareve, but also completely vegan.  That’s because I have declared “Vegan Vursdays” and tonight, we are hoping to have bread with soup – a classic combination that’s perfect for a day like today.

I found this recipe for Sourdough Corn Bread that looked good (though I might not go so far as to shape it into bread bowls), except it calls for starter at 100% hydration.  The starter that I’ve been building up all week is more of a stiff starter (I estimated 50, but that’s probably not right, either).

At The Fresh Loaf, I found this primer explaining the math of how to convert recipes to use a stiffer or thinner starter, but it started giving me a headache.

So – always my father’s child! - I broke it down using a spreadsheet.  You just plug in:

And it does the math:  how much extra flour or water to add (or remove) to/from the recipe to obtain hopefully similar consistency.

Here’s what it came up with!

I used my updated quantity of flour, but only about 425g total water instead of almost 500g.  The original recipe says to hold back some of the water, and I’m glad I did.  The corn flour / cornmeal may have had something to do with this, because it absorbs water differently.

I actually didn’t have what I’d consider corn FLOUR – what is that, anyway?  But I had Bob’s Red Mill stone-ground cornmeal, which contains the bits that are usually not included in cornmeal, so I think it’s roughly equivalent, if quite a bit grittier.  When it comes to cornbread, I don’t mind gritty.

Took some kneading to work in the starter completely.  If I hadn’t been so discombobulated today, and had the luxury of time, I probably would have broken it up more and maybe even stirred it well into the water before I started.  But I eventually got it evenly distributed into the dough: 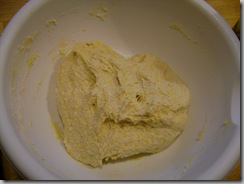 What I ended up with is a very moist dough that should benefit from a couple of stretch and fold operations in the next hour before I actually shape it into loaf/loaves (haven’t decided yet on the final portioning/shaping).

Wish me luck!!!  It’s been a terrible day in almost every other way… at the very least, I deserve good bread.  Right?