Stretch and fold!  I heard the term many times before I actually tried it myself.  Now, I do it all the time… and it’s improved my breads considerably.

The stretch n’ fold is especially useful in developing a very wet dough, when you can’t or don’t want to do a lot of kneading.  It’s incredible when you

The wetter the dough, the more you will need your trusty dough scraper, and perhaps a floured surface, but the goal here (as I understand it) is to incorporate as little new flour as possible.

Before I say anything about stretching and folding, though, I want to add a big NO:  just say no to PUNCHING down the dough!  (hey, that rhymes)

Even if a recipe says you should do it, and even though I did it for years, few legitimate bread recipes will ask you to pummel all the rise out of your bread.  The bread has been working SO hard to rise that you’d be shooting yourself in the foot to handle it so roughly.

Worse, I used to interpret “punch down dough” as “knead it all over again, at great length.”  Hmm… a recipe for tough, dense, chewy bread if ever I’ve heard one!  If you like that kind of bread, well, fantastic… but I don’t.

Nowadays, I treat dough more cautiously.  I’m not afraid of it (no matter how wet and gloppy it gets, I trust my floured hands and bench scraper to keep things tidy!) – but with a little respect for the work that’s already taken place.

Now that you’re convinced here’s how you do the stretch n’ fold with your own dough!

1) After your dough has had some amount of time to rise  (an hour or so, or as specified in the recipe), turn it out gently (using your trusty teeny bowl scraper!) onto a wooden surface.  (sorry – forgot to take a picture of this step)

2) Press, pat and spread the dough gently – you don’t want to lose all those bubbles, just redistribute them a bit – into a roughly rectangular shape. 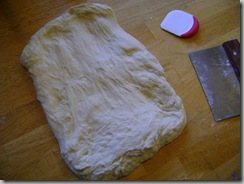 3)  Pick up one short edge of the dough – use the scraper if you have to – and bring it up about 2/3 of the way down the length of the rectangle, like you’re folding a letter. 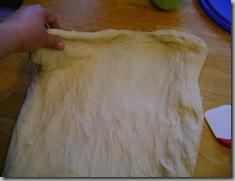 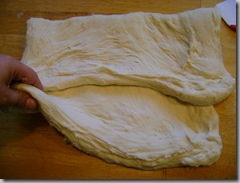 4)  Now, pick up the other short edge and fold it so it completely covers the rest of the dough.  You’ve just folded the dough in thirds, like a letter!  The dough now looks like a (smaller) rectangle. 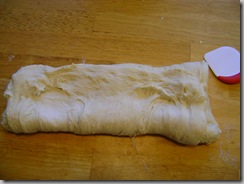 5)  Now, we’re going to do it again.  Pick up one of the short ends of the rectangle (using the scraper again if you have to), pull it away from the rest of the dough, and then fold it 1/3 of the way back.

6) Grab the other short end, stretch it the same way, and fold it 1/3 of the way back.  It won’t look like a letter now, it just looks like a big fat folded blob of dough. 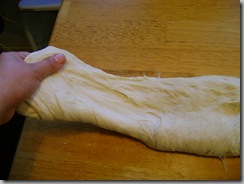 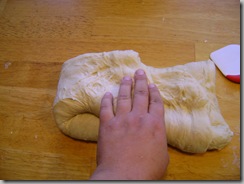 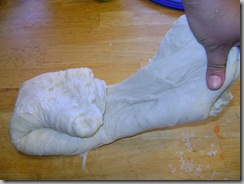 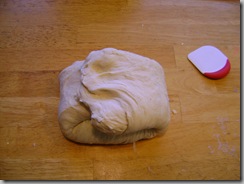 7)  Return letter-folded dough back to bowl, cover with lid, and allow to rest for at least another 45 minutes to an hour, until the dough has had a chance to smoothe out, relax, and rise a bit more. 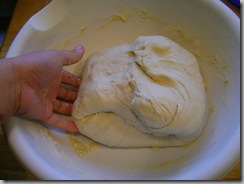 Enjoy your own yummy bread!