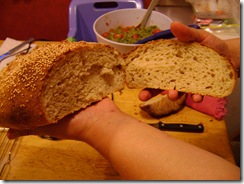 At last, against all odds, and after several disastrous and/or ho-hum attempts, I have accomplished the seemingly impossible:  a perfectly-risen, perfectly-baked, perfectly delightful loaf of Sicilian No-Knead Bread (the sourdough variation).

It rose overnight and then some, stretch-and-fold maybe around 12:30, and around 2 pm, I formed the loaf.  The combination of sesame and semolina on the crispy crust backdrop is utterly delightful.

The only major flaw in this bread was too little oven/stone preheating.  I suspect that led to the stone being too cool for the initial jolt on the bottom crust.  It was ever-so-slightly soft, and I think a longer preheat would have taken care of that.  However, the bread was getting mushy and starting to spread.  Since sourdough loses definition so easily, I chose to bake it right away rather than wait for a super-hot stone.  I think it was the right decision.

The recipe calls for a 475° oven.  Mine was only set at 450°, but even at that temperature, the crust couldn’t make it all the way through a 40 minute bake time without getting much too dark.  I tented it with tinfoil around 35 minutes and gave it another 15 minutes to bake in the tent.

Yummy!  I feel so proud, but nobody else here could really care less… so I suppose I am an unsung genius.