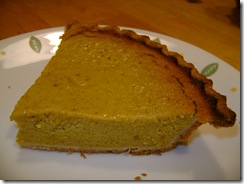 Ted had no idea it was Thanksgiving this weekend, but I swear, there is something primally Canadian in him that I have never had… he’s just innately tuned in to the seasons here.  So I wasn’t surprised when he announced last night, out of the blue, that he was making pumpkin pie this Shabbos.

Since it’s our second time enjoying this recipe, which I found on Chowhound, I thought I’d repost it here.   The original poster aptly described this recipe as “light, more like custard than the dense, rubbery texture I associate with pumpkin pie.”  Indeed, I’d even call it fluffy – along the lines of a good cheesecake.

This “can’t believe it’s not dairy” recipe uses coconut milk instead of the standard cream or evaporated milk.  You can taste the coconut slightly, but it is a gentle taste that, in my opinion, complements the pumpkin really nicely (it originally just said “nicely,” but I added really after I had tasted the pie!).

Ted is using one of the little pie pumpkins we bought at the pick-your-own apple place.  We didn’t pick it, but we feel like we know where it came from, which is nice.  ;-)

Post-Shabbos p.s.  The only thing I didn’t love is that it was not the world’s best pumpkin despite knowing its provenance.  The flesh was too stringy, which added a slightly unpleasant “fibre” element to the pie.  I recommend using a very smooth-textured pumpkin and mashing it well – or using 2 cups of organic tinned pumpkin (NOT tinned pumpkin pie filling!).