I’ve been sprouting these wheat berries for a few days now… they’re ready.  Now what should I do with them??  I have some rye flour I’ve been wanting to play around with… any thoughts? 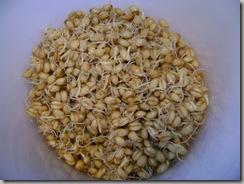 (the sprouts are in the fridge now, awaiting their fate – they should keep for a bit while I decide!)

Original recipe, speltless, is here, apparently adapted from Peter Reinhardt’s Whole Grain Breads, which I haven’t read.    (from Kath Eats, a blog where I borrowed another recipe a while back, for making Ciabatta and Focaccia from the same batch of dough.

(I also just discovered that the lovely Kath and her husband Matt – who bread-blogs at her food blog – are opening their own Great Harvest Bread franchise this fall!)

I have no whole wheat flour in the house, but some leftover whole-grain spelt, a gift from my sister a long, LONG time ago.  I decided to use it up with this recipe.

I used King Arthur Flour’s chart, here, to make the substitutions.  They list a 4oz cup for whole wheat, and a 3.5oz cup for spelt.

Tomorrow afternoon, I’ll crush up the sprouted wheat berries and turn the whole mess into a lovely wheaty spelty bread for our supper!  (I hope)