It’s my disasters that keep me humble… that’s for sure.
(Speaking of disasters, have you entered my Kitchen Disaster contest yet???)

Then again, I bet you don’t get so many disasters with all those other marginally competent bread blogs out there!!!  I bet that’s how I earned my fifteen loyal followers in the first place, by being human, just like them!

So.  If you recall, I decided to make a delicious sprouty, wheaty bread for our supper tonight!  I started sprouting the wheat berries on Monday, and mixed up a couple of components of this bread last night.

Here’s what I started with when I picked it up this afternoon:  “soaker”, preferment, exactly 11g of sprouted wheat berries. 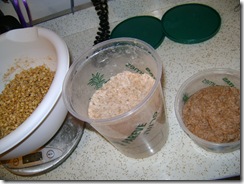 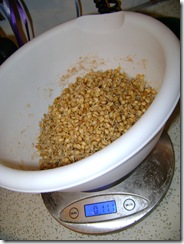 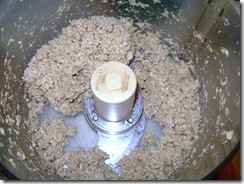 Holds together when smooshed into a ball in your hand: 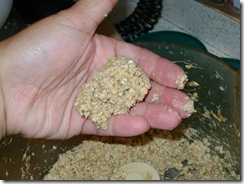 Tossed in the rest of the flour, touch of honey, touch more yeast and kneaded the whole mess together.  Should have torn up the various starter pieces to ensure evenness, but I didn’t.  That didn’t make a huge difference. 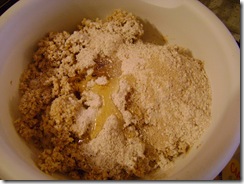 The dough was actually incredibly clean and kneadable.  Once mixed, it didn’t shed any flour or moisture or even leave a trace on the table as I kneaded.

Slip it in a bowl and allow to rest 2-3 hours, folding once. 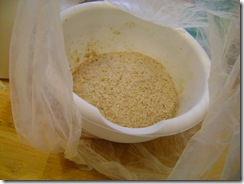 End of the rise time – nicely risen, though I accidentally knocked it down a bit before I remembered to take a picture. 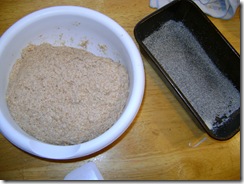 Spread into a rectangle, and without degassing much, roll tightly into a sandwich loaf.  This is actually the best one I’ve ever done! 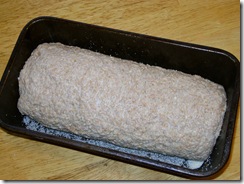 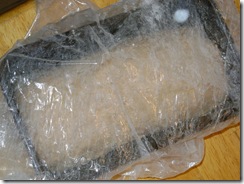 Ooh, nicely risen, it was just about at the top of the pan. 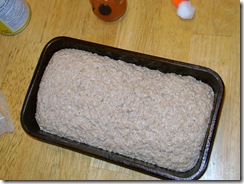 Bake half an hour – and then an extra 5-10 minutes for good n’ doneness.  And here’s where I need a thermometer, because it looked fine to me, and I pulled it out!!! 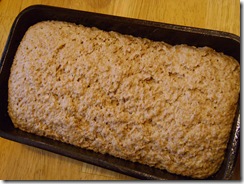 Took its picture, turned it out, tapped it – it sounded FINE; what do I know?

Let it cool – hey, I was sooo proud of myself!

Slice, take a picture… first few slices were okay, and then… 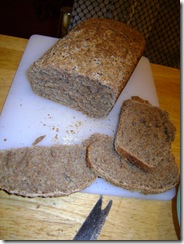 Kaboom!  The whole loaf basically disintegrated. It was at once powdery and gummy in the centre. 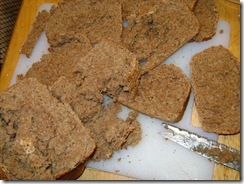 Apologized, almost cried, handed everybody their bready fragment as we all tucked into our sandwiches of homemade falafel patty and veggies on gummy, crumpled-up bread bits. 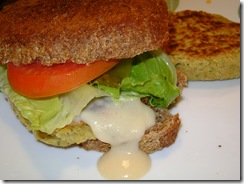 The silver lining:  it really WAS the most delicious bread.  The sprouts made it taste exactly like the commercial malt bread I grew up loving – and have been missing these past, ooh, twenty years.  The spelt added a touch of sweetness and lightness, as I expected,   Although hearty, it was delicious bread that everybody enjoyed… if only it wasn’t a gooey crumbly mess.

My brain is nagging, trying to telling me something – a message eking its way through the white noise.  Listen!  Can you hear it; whispering, hissing?

Yup.  Did you notice I forgot to slash the loaf?  I didn’t!

I don’t know if that would have made ALL the difference, but it surely would have helped with the crumb – ie allowed it to expand beyond the confines of a fairly low top crust.

Indeed, if you look at the photo of the whole loaf, it looks suspiciously like it was trying to grow higher and got calcified in place instead.

I didn’t exactly FORGET to slash it.  Just, well, you don’t always have to with a sandwich loaf like this.  But I guess with this one, you do.  Next time, I’ll know.

Will I make it again?  Well, I’m all out of spelt, so I may try it with the whole wheat it originally called for, or I may beg my sister for another bag of spelt!  It’s a lot of planning ahead, to start sprouting wheat berries on Monday for bread on Thursday.  And I just remembered that I’m out of wheat berries.

None of which are insurmountable difficulties, and considering it’s hard to find a whole-grain loaf that I really love, I’m definitely going to have to add this to my list of Breads for the Future.