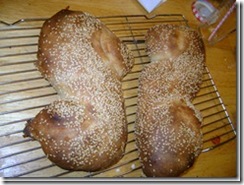 So I made Sicilian no-knead bread, aka Pane Siciliano, kind of.  And it turned out badly, kind of.

But it totally serves me right!

Let’s see… shortcuts?  I used the wrong amount of flour, the wrong rise times (bulk and loaves), pulled it out of the oven too early, sliced it open hot.  Oy, vey, the things a fast day will do to you, and I wasn’t even, technically, fasting.

That said, this was AMAZING bread.  Utterly mindblowing.

Yes, the middle, though fully-cooked, was gooey because of being both underbaked and undercooled.  But the texture of the durum flour!  The flavour of the sesame seeds!  The crust was both crunchy and light – I told YM to think of it as the best breadsticks he’d ever eaten.

And even the gooey middle (it reminded me of a Chinese red-bean bun I used to get at dim sum which was crunchy with sesame seeds on the outside and shiny with glutinous rice flour on the inside) was heavenly, in its own weird way.

I didn’t even take a picture of the inside of the bread – a first for me, but I was just SO ashamed that I hadn’t allowed this bread to take centre-stage properly.

I will definitely make it again.  Maybe even right now, if I can get off my bottom and get it done.  I feel addicted, like I must have more of this bread right this instant.

Still wish I had a dough whisk.