One reason I’m philosophical about making the Hated Challah is because it’s not our ONLY Yom Tov bread option this time around…!  Yup, I’m making Roasted Garlic Potato Bread.  Just ‘cuz I love it so.

Love love LOVE the idea of swishing up a potato with yeast and flour, then tossing it into my brand-new economy-sized (aka tiny) cast-iron dutch oven (no brand name, which is a bad sign:  $30-something at The Bay).

I also wanted to metricize / weigh-icize my favourite / easiest recipe for this bread.

By the way, if you’re hesitant about making something with this much garlic, don’t be.  The garlic is pre-roasted, which mellows it, and it really is barely discernable in the final flavour of the bread.  On the other hand, if you want a REAL hit of garlic, consider roasting TWO heads of garlic to double the garlicky goodness.  Or roast some garlic afterwards and slather it on top!

Originally from Artisan Bread in Five Minutes a Day.

Adapted from version at the Plain Chicken blog using measurements given at the Artisan Bread in Five blog.  However, I get best results with a slightly lighter cup of flour – perhaps a difference between US and Canadian all-purpose flour.

Note:  Before starting this dough, roast two whole potatoes (three if they’re small).  I use organic, and roast them in the skin.  At the same time (but it’ll take less time), wrap up a head of garlic in tinfoil and roast it alongside.  Remove garlic when soft all the way through; ditto for potatoes.  Mash garlic into 1 cup of mashed potatoes.  Mine weighs around 258g with the garlic mixed in.  I leave skins on the potatoes. 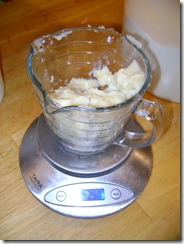 1.  In large bowl, combine water with yeast, salt, sugar.  Stir to combine well (don’t leave huge clumps of yeast like I did here!). 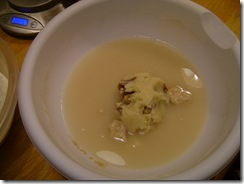 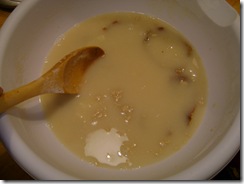 4.  Add flour all at once and stir vigourously.  This is where I wish I had my Danish Dough Whisk.  It has been ordered; I finally broke down.  It is on its way. 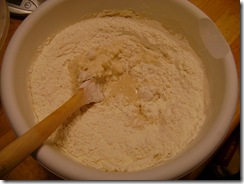 5.  When it gets hard to stir, make sure all flour is more or less incorporated, then let it rest.  After 20 minutes or so, the dough will noticeably slacken and you’ll be able to finish mixing it.  I made the challah dough while I was waiting. 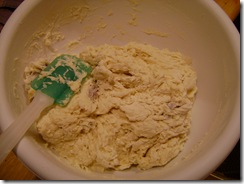 6.  After about half an hour, the dough was MUCH looser (I hope it’s visible here), and I was able to finish mixing. 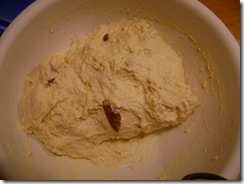 7.  Let dough rest in bowl for 2 hours, then refrigerate at least overnight.

8.  (optional) Before putting it in the fridge, I took it out and did a few “stretch and fold” operations, then tucked it in for the night. 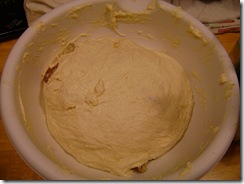 9.  Remove from fridge.  This dough is easiest to work with when cool – use lots of flour!  I sprinkled the “peel” with semolina so it would slide off easily and to give the bottoms a nice texture.

10.  With the help of a bench scraper to prevent sticking, form into basic boule shape, or batard, or loaf, or any simple shape you want.  Don’t try to do anything fancy with a dough this loose.  I made two “big” 1.5lb (675g) boules and the rest (around 650g?) I dropped in a bowl with parchment. 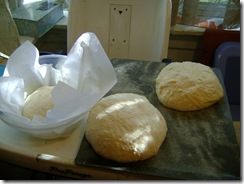 (I was going to bake the small boule in my brand-new little cast-iron dutch oven, but it turns out that there was a SUBSTANCE on the inside of the dutch oven that needed to burn off… smelled foul when I opened it, so I’m going to cool it off and give it a good scrub before its first use.)

11.  Preheat oven to at 450°.  Allow stones etc to be AT temperature for at least half an hour before baking.  Meanwhile, allow loaves to rise 45 minutes to an hour. 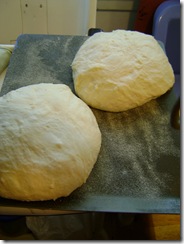 12.  Slash loaves.  Bake 40 minutes at 450°.  These turned out WAY ugly because a) I didn’t slash them right, and b) they slipped around as I plopped them on the stone.  The little one that was on the parchment paper turned out just fine. 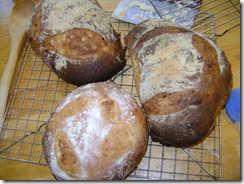 13.  Cool fully before slicing.  If you can wait that long.  (this is a good time to take out the butter to soften a bit)

You can see a little bit of potato skin in the bread itself, but it is nice and soft and lends a nice flavour and “hit” of texture to the bread, just enough to let you know that something interesting is going on… 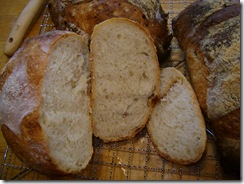 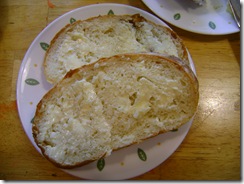