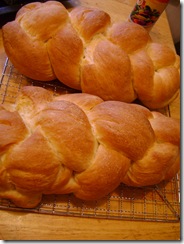 The question on everybody’s mind:  which challah will it be for Rosh Hashanah this year?

Last year, I did half and half of my reliable challah and the Artisan Bread in Five Minutes a Day sweet master dough.

For this year, it was a toss-up:  Chavi’s Perfect Balance Challot or Tante B’s Famous Challah, which I found on recipezaar.com.  The truth is, when I looked closely, both recipes are pretty much the same:  about 1 kg of flour, 1 egg, about 2 cups of water.

But Chavi’s acclaimed challah, I noticed, has almost three times the oil (1 1/3 instead of 1/2 a cup!) and also a bit more sugar.  It’s not that I’m so into healthy eating, but I found the Famous Challah quite delicious.  If we’re going to be eating a ton of this stuff over the next four weeks, I think I’m willing to trade off a bit of amazing deliciousness for a bit less of a guilty conscience if I decide to take seconds.

Anyway, I’m doing more cooking on Sunday, so if I don’t enjoy these over Shabbos, I can always do a batch of Chavi’s instead.

No photos of the huge double batch rising in the bucket at the moment.  Camera out of batteries, and so am I.  Use your imagination!

Here they are (above), fully risen, shaped and baked.   I let them rise WAaaay too long, apparently with absolutely no ill effects.

The recipe made three 680g loaves (approx 1.5lb) plus one 780g loaf (oops – scaled it wrong, so that will be our big loaf for Shabbos dinner).

You can’t see it here, but these are HUGE, easily the biggest 1.5lb challahs I’ve ever made.  Apparently yummy, too, at least according to the people (mostly under 3 feet tall) who tried it at our Rosh Hashanah Party this morning.

I shaped two of the 1.5-lb loaves into “crown” challahs – fancy four-braids looped into a circle, which I then tossed (unbaked) into the downstairs freezer to save for Yom Tov.