Auntie Sally again… with a preferment!

I’m making Auntie Sally’s challah dough for Yom Tov (third and final batch of dough!) because I think it will make a couple of nice challahs along with some excellent cinnamon buns.  I have yet to make really EXCELLENT pareve cinnamon buns, so here’s hoping.

I’m modifying my formula from last time, splitting it up to include a bit of a preferment.  Why the heck not???  Why a preferment and not an autolyse, like this winning recipe from Challah Crumbs (which I very nearly selected)?  I dunno.  I have some time… why not let the stuff sit in a bowl as long as possible?

So here’s the same recipe, divided, with 25% of the flour in the preferment.  I estimated 140g for a cup last time, so I’m keeping that the same.

Postscript:  indeed, it was very sloppy.  Here it is after 2.5 hours or so fermenting in a large covered bowl. 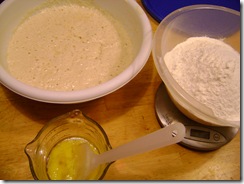 Let’s see how this goes! 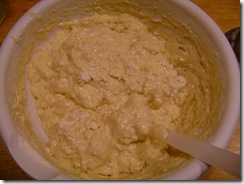 Two cups of additional flour, all-told, hence the adjusted totals above.  Plus some sprinkled on the table so the stuff wouldn’t absorb my hands as I kneaded.

But in the end, it did make a beautiful dough: 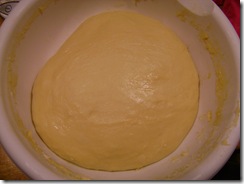 And now it’s in the bucket in the fridge to sit & rise overnight.